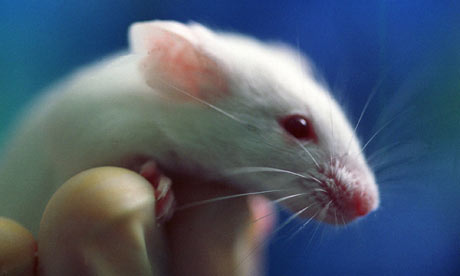 The ageing process is poorly understood, but scientists know it is caused by many factors. Highly reactive particles called free radicals are made naturally in the body and cause damage to cells, while smoking, ultraviolet light and other environmental factors contribute to ageing.

The Harvard group focused on a process called telomere shortening. Most cells in the body contain 23 pairs of chromosomes, which carry our DNA. At the ends of each chromosome is a protective cap called a telomere. Each time a cell divides, the telomeres are snipped shorter, until eventually they stop working and the cell dies or goes into a suspended state called “senescence”. The process is behind much of the wear and tear associated with ageing.

At Harvard, they bred genetically manipulated mice that lacked an enzyme called telomerase that stops telomeres getting shorter. Without the enzyme, the mice aged prematurely and suffered ailments, including a poor sense of smell, smaller brain size, infertility and damaged intestines and spleens. But when DePinho gave the mice injections to reactivate the enzyme, it repaired the damaged tissues and reversed the signs of ageing.

“These were severely aged animals, but after a month of treatment they showed a substantial restoration, including the growth of new neurons in their brains,” said DePinho.

Repeating the trick in humans will be more difficult. Mice make telomerase throughout their lives, but the enzyme is switched off in adult humans, an evolutionary compromise that stops cells growing out of control and turning into cancer. Raising levels of telomerase in people might slow the ageing process, but it makes the risk of cancer soar.

DePinho said the treatment might be safe in humans if it were given periodically and only to younger people who do not have tiny clumps of cancer cells already living, unnoticed, in their bodies.

David Kipling, who studies ageing at Cardiff University, said: “The goal for human tissue ‘rejuvenation’ would be to remove senescent cells, or else compensate for the deleterious effects they have on tissues and organs. Although this is a fascinating study, it must be remembered that mice are not little men, particularly with regard to their telomeres, and it remains unclear whether a similar telomerase reactivation in adult humans would lead to the removal of senescent cells.”

DePinho said none of Harvard’s mice developed cancer after the treatment. The team is now investigating whether it extends the lifespan of mice or enables them to live healthier lives into old age.

Tom Kirkwood, director of the Institute for Ageing and Health at Newcastle University, said: “The key question is what might this mean for human therapies against age-related diseases? While there is some evidence that telomere erosion contributes to age-associated human pathology, it is surely not the only, or even dominant, cause, as it appears to be in mice engineered to lack telomerase. Furthermore, there is the ever-present anxiety that telomerase reactivation is a hallmark of most human cancers.”