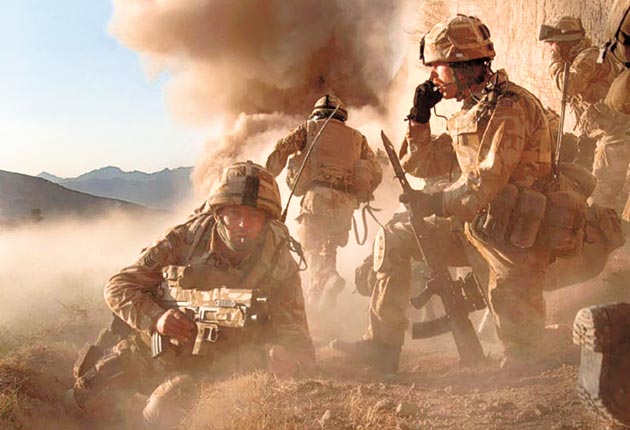 As casualties continue to mount in Afghanistan, so does the cost of war after nine years

Since there are now three conflicts in the greater Middle East; Afghanistan, Iraq, Israel/”Palestine” and maybe another Lebanese war in the offing, it might be a good idea to take a look at the cost of war.

Not the human cost – 80 lives a day in Iraq, unknown numbers in Afghanistan, one a day in Israel/”Palestine” (for now) – but the financial one. I’m still obsessed by the Saudi claim for its money back after Saddam Hussein invaded Kuwait in 1990. Hadn’t Saudi Arabia, King Fahd reminded Saddam, financed his eight-year war against Iran to the tune of $25,734,469,885.80? For the custodian of the two holy places, Mecca and Medina, to have shelled out $25bn for Saddam to slaughter his fellow Muslims was pretty generous – although asking for that extra 80 cents was surely a bit greedy.

But then again, talking of rapacity, the Arabs spent $84bn underwriting the Anglo-American operation against Saddam in 1990-91 – three times what Fahd gave to Saddam for the Iran war – and the Saudi share alone came to $27.5bn. In all, the Arabs sustained a loss of $620bn because of the 1990 Iraqi invasion of Kuwait – almost all of which was paid over to the United States and its allies. Washington was complaining in August 1991 that Saudi Arabia and Kuwait still owed $7.5bn. Western wars in the Middle East, it seemed, could be fought for profit as well as victory. Maybe Iraq could have brought us more treasure if it hadn’t ended in disaster. At least it would help to have paid for America’s constant infusion of cash to Israel’s disastrous wars.

According to Israeli historian Illan Pappé, since 1949, the US has passed to Israel more than $100bn in grants and $10bn in special loans – more than Washington hands out to North Africa, South America and the Caribbean. Over the past 20 years, $5.5bn has been given to Israel for military purchases. But for sheer self-abuse, it’s necessary to read of the Midas-like losses in the entire Middle East since just 1991 – an estimated $12,000,000,000,000. Yup, that’s a cool $12trn and, if you don’t believe me, take a look at an unassuming little booklet that the “Strategic Fortnight Group” published not long ago. Its statistic caught a few headlines, but was then largely forgotten, perhaps because it was published in faraway Mumbai rather than by some preposterous American “tink-thank” (as I call them). But it was funded by, among others, the Norwegian and Swiss foreign ministries. And the Indians are pretty smart about money, as we know as we wait in fear of its new super-economy.

So since there may soon be a new Israel-Hizbollah war, let’s get an idea of the astronomical costs of all those F-16s, missiles, “bunker-busters”, Iranian-made rockets, smashed Lebanese factories, villages, towns, bridges, power stations, oil terminals – we will not soil ourselves with Lebanon’s 1,300 pathetic dead or Israel’s 130 pathetic dead in the 2006 war for these are mere mortals – not to mention the losses in tourism and trade to both sides. Total losses for Lebanon in 2006 came to an estimated $3.6bn, for Israel $1.6bn – so Israel won hands down in terms of money, even if its rabble of an army screwed everything up on the ground. But among those who paid for this were American taxpayers (funding the Israelis) and European taxpayers, Arab potentates and the crackpot of Iran (funding Lebanon). So the American taxpayer destroys what the European taxpayer rebuilds. It’s the same in Gaza; Washington funds the weapons to blow up EU-funded projects and the EU rebuilds them in time for them to be destroyed again. But boy oh boy, in the Lebanese war, US arms manufacturers make a packet – and so, to a lesser extent do the Iranian and Chinese missile dealers.

And just look at the Middle East “arms race” – the jockeys being the arms manufacturers, the punters being the countries of the region and, of course, their “huddled masses”. Saudi Arabia, as the Mumbai report said, leaps in a decade between 1996 and 2006 from $18bn to $30bn a year – it’s just negotiating a $60bn deal with the US – and Iran from $3bn to $10bn. Israel has gone from $8bn to $12bn. In fact, there’s an interesting correlation between Israel’s state-of-the-art democratically minded missile-firings between 2000 and 2007 – 34,050 – and Hamas’s evil, terrorist-inspired missile firings: a rather piffling 2,333.

There’s a host of other goodies in this appalling list of financial and social horrors. On 11 September 2001, just 16 people were on America’s “no-fly” list; by December, it was 594. By August 2008, it had reached an astonishing 100,000. At present rate, the US “terrorist watch list” will reach two million souls in two years’ time. Since 1974, UN peacekeepers on the Golan Heights have cost $47.86m while the UN has forked out $680.93m for its forces in southern Lebanon since 1978.

So coming soon to a war near you; oceans of blood, bodies torn to shreds, of course. But bring your credit card. Or a cheque book. It’s big business. And there may be profits.

1 thought on “Robert Fisk: Oceans of blood and profits for the mongers of war”