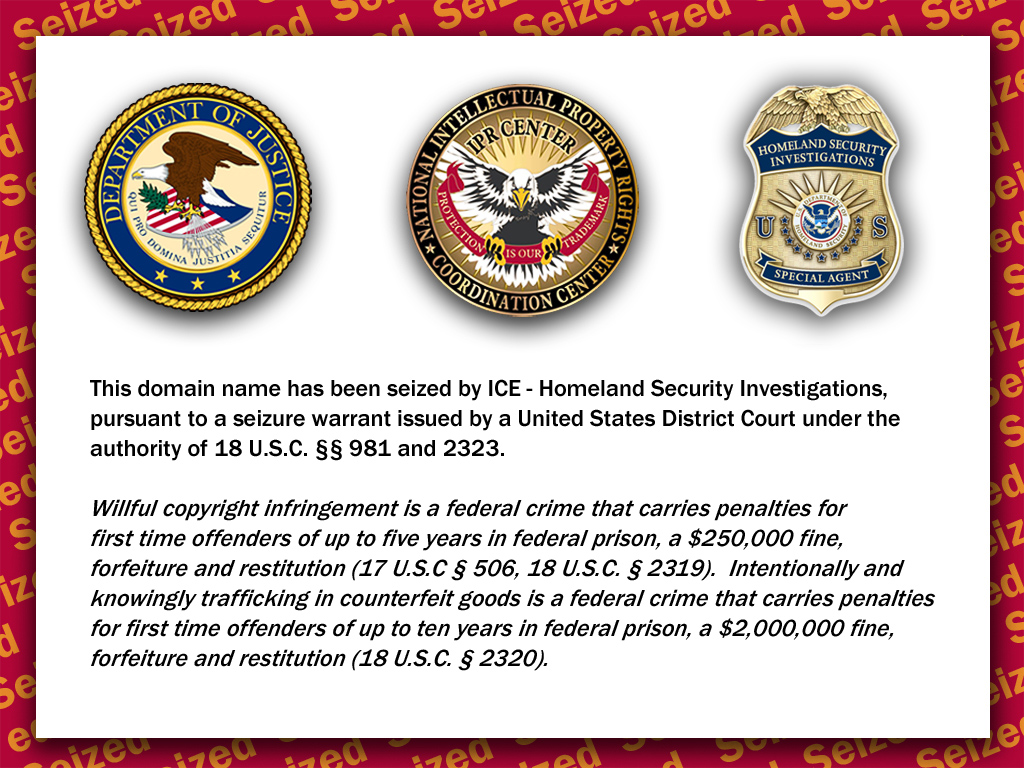 Users of the Web site torrent-finder.com saw this message after the site was seized on Friday. (Click on image to enlarge.)

In what appears to be the latest phase of a far-reaching federal crackdown on online piracy of music and movies, the Web addresses of a number of sites that facilitate illegal file-sharing were seized this week by Immigration and Customs Enforcement, a division of the Department of Homeland Security.

Users of the Web site torrent-finder.com saw this message after the site was seized on Friday.

By Friday morning, visiting the addresses of a handful of sites that either hosted unauthorized copies of films and music or allowed users to search for them elsewhere on the Internet produced a notice that said, in part: “This domain name has been seized by ICE — Homeland Security Investigations, pursuant to a seizure warrant issued by a United States District Court.”

In taking over the sites’ domain names, or Web addresses, the government effectively redirected any visitors to its own takedown notice.

“ICE office of Homeland Security Investigations executed court-ordered seizure warrants against a number of domain names,” said Cori W. Bassett, a spokeswoman for ICE, in a statement. “As this is an ongoing investigation, there are no additional details available at this time.”

Among the domains seized were torrent-finder.com and those of three sites that specialized in music: onsmash.com, rapgodfathers.com and dajaz1.com. TorrentFreak, a news blog about BitTorrent — a file-sharing system that has tended to elude the authorities because it is decentralized — said that at least 70 other addresses had been seized, most belonging to sites related to counterfeit clothing, DVDs and other goods.

On Friday, torrent users were already discussing new sites that had popped up to serve them.

The takedown notices are similar to those that went up on nine sites in June as part of an initiative against Internet counterfeiting and piracy that the agency called Operation in Our Sites.

In announcing that operation, John T. Morton, the assistant secretary of ICE, and representatives of the Motion Picture Association of America called it a long-term effort against online piracy, and said that suspected criminals would be pursued anywhere in the world. “American business is under assault from counterfeiters and pirates every day, seven days a week,” Mr. Morton said. “Criminals are stealing American ideas and products and distributing them over the Internet.”

Ms. Bassett would not comment on whether the latest raids were part of Operation in Our Sites, and a spokesman for the Recording Industry Association of America, which represents the major recording labels, declined to answer questions.

The new seizures also come as a new bill, the Combating Online Infringements and Counterfeits Act, is making its way through Congress. The bill, which was approved by a Senate committee last week, would allow the government to shut down sites that are “dedicated to infringing activities.”

Critics have said the law is too broad, and could affect sites that have nothing to do with file-sharing; the Electronic Frontier Foundation, an online civil liberties group, has called it “an Internet censorship bill.” Waleed A. GadElKareem, who operated Torrent Finder from Egypt, said his site was shut down on Thursday without any notice.

“My Web site does not even host any torrents or direct-link to them,” Mr. GadElKareem wrote in an e-mail, adding that he only links to other sites. “I am sure something is wrong!”

He added that his server was up and running at a different address.

A version of this article appeared in print on November 27, 2010, on page B2 of the New York edition.