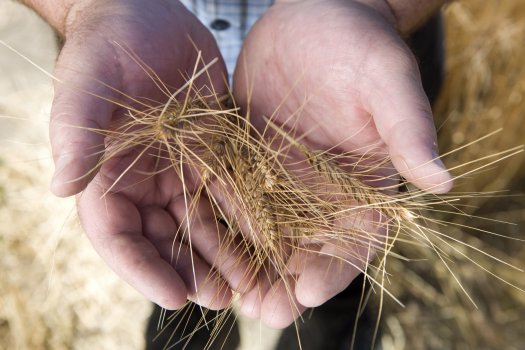 This year, your bread dishes are probably not genetically modified — consumer and food industry opposition has so far prevented any GM wheat from making it to your table. So your biscuits, thickened gravy and turkey stuffing are made with flour from traditionally bred wheat.

But several seed companies, including Monsanto, Syngenta, BASF and others, are working on transgenic wheat. U.S. Wheat Associates, an industry group, said in early 2010 that GM wheat is still several years away, but efforts are ongoing to improve its acceptance among international consumers.

Monsanto Co., the world’s largest producer of genetically modified seed, backed off commercialization of “Roundup Ready” wheat several years ago, amid concerns it could hurt the U.S. wheat market. But earlier this month, the firm said it’s the “right time” to pursue development of drought-resistant and high-yielding wheat.

The Swiss firm Syngenta said this summer it was working with the International Maize and Wheat Improvement Center (CIMMYT) to focus on developing stronger wheat. The firm has been exploring genetically modified traits in wheat for several years, though it has not yet been commercialized.

Worldwide, wheat is the most-traded food crop and it is the single largest food import in developing countries. In some ways, it was the first widely modified crop. Norman Borlaug won the 1970 Nobel Peace Prize for his work on increasing wheat yields in Mexico and developing nations.

1 thought on “Monsanto, Syngenta, BASF And Others Working On GM Wheat”