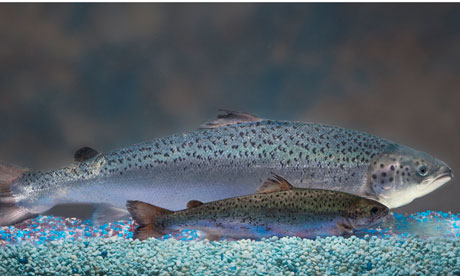 Obama’s FDA is regulating genetically engineered salmon, a genetically modified organism (GMO) that is the first of its kind, not as an animal, but as an animal drug. Normally, a veterinary drug would be used for health purposes, but there’s no therapeutic benefit associated with jacking up an Atlantic salmon with the genes of a Chinook salmon and the eel-like ocean pout to make it grow twice as fast. On the contrary, genetic engineering increases the salmon’s mortality, disease and deformity. So, why would the FDA treat a the first genetically engineered animal for human consumption like a drug? The idea came from the biotech industry. They knew that the FDA’s animal drug process would keep companies’ “proprietary” information secret, while limiting public participation and downplaying food safety concerns. Genius.

9. The GMO Part of the GMO Salmon Isn’t Being Safety Tested

Since 1992, the FDA has operated under the legal fiction created by the Bush-Quayle Administration that there is no risk associated with the human consumption of genetically engineered plants and animals. The FDA explains that DNA is Generally Recognized as Safe, so genetically engineered DNA is safe, too, and it doesn’t have to be safety tested. Source: FDA’s Statement of Policy – Foods Derived from New Plant Varieties (PDF)

8. Frankenfish DNA Could Change the Bacteria of Your Gut

A human study conducted by the UK’s Food Standards Agency found that consuming genetically engineered soy can result in “horizontal gene transfer,” where the bacteria of the gut takes up the soy’s modified DNA. With GMO salmon, the bacteria of our digestive tracks could take up the engineered salmon genes, but the FDA isn’t looking into whether this would happen or how it might effect our health.

7. If It Swims Like a Salmon, FDA Says It’s Safe to Eat

6. FDA Lets the Frankenfish Company Test Its Own Product’s Safety

The FDA’s food safety review of GMO salmon consists of collecting data produced by AquaBounty, the company that wants to sell it. Not surprisingly, that data is seriously flawed. * AquaBounty did not always segregate, or even collect, data specific to their AquAdvantage GMO Salmon. And, FDA did not require AquaBounty to produce data in the actual conditions under which the salmon will be commercially produced, so we don’t have food safety data on the Panama-raised, triploid, monosex AquAdvantage Salmon that people will be actually be eating if the FDA grants approval. * FDA did not require AquaBounty to show that AquAdvantage and normal salmon were similar when raised under the same conditions. AquaBounty’s food safety data for genetically engineered salmon did not have to match data for its control salmon. FDA compared AquaBounty’s data for genetically engineered salmon to data for farmed salmon raised under unknown conditions and data for salmon from other scientific studies. * AquaBounty only tested a few fish, making it less likely that its food safety studies would reveal statistically significant differences between genetically engineered and normal salmon. * AquaBounty’s detection levels were often set too low to produce food safety data for comparison. * AquaBounty selected which fish to test, and unblinded samples. But, even with all of the flaws and biases that likely hid differences between GMO and normal salmon, it’s clear that Frankenfish isn’t same.

GMO salmon has 40% more IGF1, a hormone linked to prostate, breast and colon cancers in humans.

GE salmon is less nutritious than normal salmon. It has the lowest omega-3 to omega-6 ratio of all the salmon in the studies FDA reviewed.

GE salmon have mean allergenic potencies that are 20% and 52% higher than normal salmon, increasing the risk of potentially deadly allergic reactions.

The FDA notes evidence of “increased frequency of skeletal malformations, and increased prevalence of jaw erosions and multisystemic, focal inflammation” in the tissues of GMO salmon. Most people wouldn’t be too surprised to learn that genetic engineering can mess a fish up. What might shock you is that the FDA dismisses these findings as “within the range observed in rapid growth phenotypes of non-genetically engineered Atlantic salmon.” The abnormalities FDA found weren’t much worse than those currently plaguing the factory farmed salmon selected for rapid growth and subjected to the physiological stress of intensive production. “Screamer disease” deforms 80% of Chilean salmon and “humpback” spinal compression is found in 70% of Norwegian salmon operations. Thanks, FDA, for letting us know that factory farmed salmon are so messed up! But, that’s no reason to turn them into Frankenfish!

The main justification for GMO salmon is that it could “reduce the pressure on wild fish stocks”. But, consumption isn’t the primary pressure on wild Alaskan salmon, which gets a “best choice” rating from the Monterey Bay Aquarium’s Seafood Watch program. The biggest threat to wild Alaskan salmon is the destruction of their habitat. Ironically, as Paul Greenberg, author of the new book “Four Fish,” explains, “While the government seeks to boost farmed salmon supplies through transgenics, it is simultaneously letting wild salmon go to pot.” The spawning grounds of wild salmon in Bristol Bay, Alaska, are threatened by the international mining giant, Anglo-American, which plans to construct Pebble Mine, the largest open-pit copper and gold mine in the US. Two months ago, a copper mine failure in China’s TingRiver killed millions of fish. A similar disaster at Pebble Mine could mean the destruction of a quarter of a billion pounds of salmon, curiously, about the same amount of GMO salmon Aqua Bounty hopes to produce. The EPA could stop Pebble Mine through the Clean Water Act but has failed to act. Greenberg writes, “More transgenic fish, less wild fish. You have to scratch your head at a government that’s planning that kind of seafood menu for its citizens. Instead of endorsing a risky experiment in genetic salmon modification wouldn’t it be better if our leaders protected wild salmon habitat? In the end we’d have just as much fish on our plates and a safer environment to boot.”

1 thought on “10 Freakiest Things About Frankenfish”