Out of more than 100,000 people stopped and searched by police using controversial anti-terror powers not one single arrest was made for terrorism-related offences, new figures show. 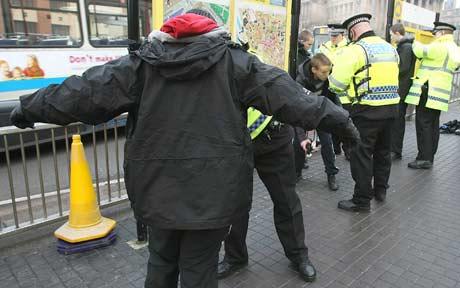 Of all the stops and searches, four out of five of these were made in the Metropolitan Police area, with almost a fifth being made by British Transport Police Photo: GETTY IMAGES

A total of 101,248 stops and searches were made under section 44 of the Terrorism Act 2000 in 2009/10, but only one in every 200 led to an arrest and none of these were terror-related, the figures released by the Home Office showed.

Theresa May, the Home Secretary, ordered a review of the controversial stop and search powers earlier this year, saying she wanted to correct ”mistakes” made by the Labour government which, she said, was allowed to ”ride roughshod” over civil liberties.

The powers allow officers to stop anyone in a specified area without the need for reasonable suspicion.

Across Great Britain, 506 arrests were made after people were stopped and searched under section 44 of the Terrorism Act, 0.5 per cent of the 101,248 stops and searches, compared with 10 per cent of stops carried out using non-terror powers.

But the use of the stop and search powers fell by 60 per cent compared with 2008/09, the figures showed.

Anti-terrorism chiefs ordered an escalation in the use of the powers after the failed bomb attack against the Tiger Tiger nightclub in London’s Haymarket in 2007.

That resulted in more than a quarter of a million people being searched in 2008/09 – the highest on record and more than twice the level of the previous year.

But after a public outcry over the use of searches, which have a disproportionate effect upon minority groups, Metropolitan Police Commissioner Sir Paul Stephenson ordered them to be scaled back in London.

The review of the Government’s counter-terrorism policy, which will report shortly, is being carried out by the Liberal Democrat peer Lord Ken Macdonald, who led changes in the way terrorists are prosecuted.

It involves police, spies, public officials and campaigners and will focus on control orders, stop-and-search, pre-charge detention, deportation of terror suspects and the use of surveillance by local authorities.

Of all the stops and searches, four out of five of these were made in the Metropolitan Police area, with almost a fifth being made by British Transport Police.

Overall, 59 per cent described themselves as white, 17 per cent as Asian or Asian British, 10 per cent as black or black British and 2 per cent as mixed ethnicity, the figures showed.

For the first time, the statistics also included an overview of the number of passengers who were examined while travelling through the UK’s air and sea ports.

One in every 30,000 passengers was examined last year, 0.03 per cent of the 220 million passengers going through the ports.

He said some parts of the security programme were “completely redundant” and that the UK should not “kowtow” to the Americans every time the US wanted something done.

But the majority of the 52 charged were charged with offences that had nothing to do with terrorism.

A total of 27 people were charged with non-terror related offences, including perverting the course of justice, placing or dispatching articles to cause a bomb hoax or knowingly obtaining another person’s identification documents with intent.

Of the others, 12 were charged with offences under terrorism legislation, including the collection of information useful to terrorists, preparation for terrorist acts and fundraising.

And a further 13 were charged under non-terrorism legislation with an offence the authorities considered to be terrorism-related, including acting with intent to cause, or conspiring to cause, explosions likely to endanger life.

Since the September 11 terror attacks in the United States in 2001, 261 suspects have been charged under terrorism legislation, 199 (76 per cent) prosecuted, and, of those prosecuted 64 per cent (127) convicted. A further seven were awaiting completion of their trials.

A further 143 were charged under non-terrorism legislation, including conspiracy to murder and conspiring to cause an explosion, the figures showed.

Of these, 133 (93 per cent) were prosecuted, and, of those prosecuted 83 per cent (110) convicted. A further seven were awaiting completion of their trials.

Of the 46 terrorism-related trials completed last year, 65 per cent of defendants were convicted, of which two in five pleaded guilty.

They were given five life sentences and one in four custodial sentences handed down were of 10 years or more.

New figures also showed 51 appeals against terrorism convictions were heard in the three years between 2007/08 and 2009/10, with seven convictions being quashed. In all, 20 of the appeals led to a shorter sentence and four resulted in a longer sentence.

As of March 31 this year, there were 102 terrorist-related prisoners in England and Wales, of whom 76% were UK nationals and four in five (83 per cent) classified themselves as Muslims. There were no prisoners classified as terrorists held by the Scottish Prison Service.

And 25 terrorist-related prisoners were discharged from prison last year, including 10 who had served sentences of four years or more.

Shami Chakrabarti, director of civil rights group Liberty, said: “These Home Office statistics highlight what a crude and blunt instrument stop and search without suspicion has been.

“It costs us dearly in race equality and consent-based policing with very little return in terms of enhanced security.”

Alex Deane, director of Big Brother Watch, which campaigns against intrusions on privacy, added: “This is no surprise. Rather than a genuine counter-terrorism tool, random stop and search has been a way of bullying and hassling our increasingly abject population.

“We have to decide what kind of society we want to live in. Random stop and search allows the state to confront the individual in the street, without cause, and demand your papers. It’s wrong.”

– UK: Every email, phone call and website visit to be recorded and stored

– UK: Only A Totalitarian State Wants To Disarms Law-Abiding Citizens