US Senate investigators said private security firms relied on warlords to find local guards, including the uncle of a known Taliban commander, known as “Mr. White” after a character in the violent movie “Reservoir Dogs.” 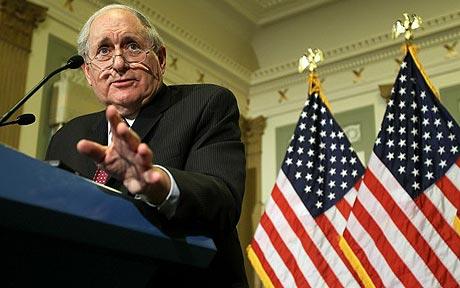 The report by the Senate Armed Services Committee follows a separate congressional inquiry in June that concluded that trucking contractors pay tens of millions of dollars a year to local warlords for convoy protection.

Democratic Sen. Carl Levin, chairman of the Senate panel, said he is worried the U.S. is unknowingly fostering the growth of Taliban-linked militias and endanger U.S. and coalition troops at a time when Kabul is struggling to recruit its own soldiers and police officers.

“These contractors threaten the security of our troops and risk the success of our mission,” he told reporters. “There is significant evidence that some security contractors even work against our coalition forces, creating the very threat that they are hired to combat.”

“We need to shut off the spigot of U.S. dollars flowing into the pockets of warlords and power brokers who act contrary to our interests and contribute to the corruption that weakens the support of the Afghan people for their government,” he added.

The Defense Department doesn’t necessarily disagree but warns that firing the estimated 26,000 private security personnel operating in Afghanistan in the near future isn’t practical.

This summer, U.S. forces in Afghanistan pledged to increase their oversight of security contractors and set up two task forces to look into allegations of misconduct and to track the money spent, particularly among lower-level subcontractors.

But military officials and Republicans on the Senate Armed Services Committee warn that ending the practice of hiring local guards could worsen the security situation in Afghanistan.

They say providing young Afghan men with employment can prevent them from joining the ranks of Taliban fighters. And bringing in foreign workers to do jobs Afghans can do is likely to foster resentment, they say.

Also, contract security forces fill an immediate need at a time when U.S. forces are focused on operations, commanders say.

“As the security environment in Afghanistan improves, our need for (private security contractors) will diminish,” Petraeus told the Senate panel in July. “But in the meantime, we will use legal, licensed and controlled (companies) to accomplish appropriate missions.”

Levin says he isn’t suggesting that the U.S. stop using private security contractors altogether. But, he adds, the U.S. must reduce the number of local security guards and improve the vetting process of new hires if there’s any hope of reversing a trend that he says damages the U.S. mission in Afghanistan.

The review concludes there were “systemic failures” in the management of the contracts, including “widespread” failures “to adequately vet, train and supervise armed security personnel.”

The panel’s report highlights two cases in which security contracting firms ArmorGroup and EOD Technology relied on personnel linked to the Taliban.

Last week, EOD Technology was one of eight security firms hired by the State Department under a $10 billion contract to provide protection for diplomats.

In the case of ArmorGroup, the Senate panel says the company repeatedly relied on warlords to find local guards, including the uncle of a known Taliban commander. The uncle, nicknamed “Mr. White” by ArmorGroup after a character in the violent movie “Reservoir Dogs,” was eventually killed after a U.S. raid that uncovered a cache of weapons, including anti-tank land mines.

ArmorGroup, based in Virginia lost a separate contract this year protecting the U.S. Embassy in Kabul after allegations surfaced that guards engaged in lewd behavior and sexual misconduct at their living quarters.

The allegation that contractors rely on warlords for local hiring is not new. Last June, a Democratic House investigation led by Massachusetts Rep. John Tierney concluded that trucking companies had “little choice” but to pay local warlords “in what amounts to a vast protection racket.”

Army criminal investigators are examining the allegations, specifically looking at whether companies hired under a $2 billion Pentagon contract to transport food, water, fuel and ammunition to troops were paying up to $4 million a week to insurgent groups.

In August, Afghan President Hamid Karzai announced that private security contractors would have to cease operations by the end of the year. The workers, he said, would have to either join the government security forces or stop work because they were undermining Afghanistan’s police and army.