Prepare for collapse and the Greatest Depression. 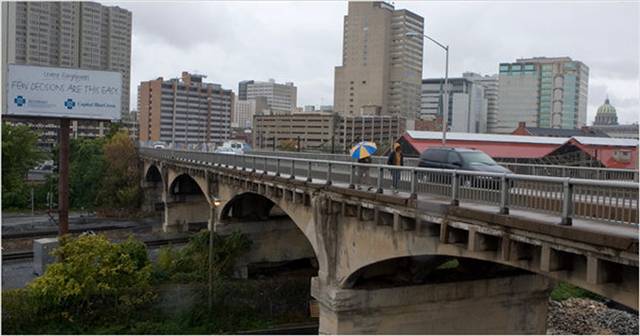 Harrisburg, the capital of Pennsylvania, dodged financial disaster last month by getting money from the state to make a payment to its bondholders.

It did so even though the state warned that the money had to be used for city workers’ pensions.

Now Harrisburg is calling on the state again. On Friday, the city said it could not meet its next payroll without money from the state’s distressed cities program.

Across the country, a growing number of towns, cities and other local governments are seeking refuge in similar havens that many states provide as alternatives to federal bankruptcy court. Pennsylvania will have 20 cities and smaller communities in its distressed-cities program if Harrisburg receives approval. Michigan has 37 in its program; New Jersey has seven; Illinois, Rhode Island and California each have at least one. This is on top of troubled housing, power and hospital authorities.

The increasingly common pleas for state assistance — after two relatively quiet decades — reflect the yawning local budget deficits that have appeared in the last two years.

As tax revenue has fallen, the cost of providing labor-intensive government services, like teaching and policing, has proved hard to reduce.

The programs, which vary by state, generally allow troubled communities to tap emergency credit lines while restructuring their finances with some form of state oversight.

Many places may indeed bridge shortfalls and make necessary changes in services.

But some public finance experts worry that the states, mired in their own financial problems, will not force communities to attack their problems head-on and solve them. If states let towns keep borrowing, without acknowledging the magnitude of the towns’ existing debts — like the pensions they owe retired public workers — they might never solve their problems and just keep drawing on the states. They could end up like miniature versions of Fannie Mae and Freddie Mac, stuck in conservatorships under government oversight with no clear way out.

Better off in bankruptcy court?

“It’s like throwing you a life preserver but never pulling you into the boat,” said Daniel Miller, a certified public accountant and the city controller in Harrisburg. He says he believes that the city might be better off in federal bankruptcy court.

Worse yet, the municipal requests for state assistance could spell problems for already beleaguered state finances. One head of a municipal bond trading desk at a major Wall Street firm said he worried more about problems bubbling up from the local level than he did about the possibility of a sudden state collapse.

If the downturn is prolonged and deep, and local governments fail to act aggressively, he said, dozens of small communities could be pushed into the arms of a state, weighing it down so much that it, too, would need a bailout. Something like that happened in Arkansas during the Great Depression, causing the only default by a state on general-obligation bonds in United States history.

Harrisburg’s problems have been building for years. The mayor wants assistance from the state, while a majority of the City Council wants to explore federal bankruptcy. Because of the disagreement, the city has not raised taxes enough or cut services enough to address its budget gap. Meanwhile, the city is being sued for failing to honor its guarantee of bonds issued by an incinerator authority.

Using the pension money to pay bondholders last month has increased the city’s total debt burden, by the state’s calculation. The city’s audited financial statements are a year late, and the most recent one gives four-year-old pension data, showing a surplus before the recession and the financial crisis took its toll.

Critics see little incentive for the city to take really difficult steps, like confronting public employees’ unions or taxing the nonprofit groups that own more than half of Harrisburg’s real estate but pay no property taxes.

Mr. Miller, the city controller, worries that the city will merely sell assets like parking garages and parks to generate cash for the short term without tackling its bigger structural problems.

When New York City had its financial crisis in the mid-1970s, it grabbed several life preservers that soon proved inadequate, before the state came up with tough measures that forced the city to make painful cutbacks — and, eventually, helped it to turn the corner.

New York City’s ability to restructure outside bankruptcy suggests that state assistance programs could be made to work and may provide a better option than a federal bankruptcy filing, said James E. Spiotto, an expert on municipal bankruptcy law with the firm Chapman & Cutler in Chicago.

In California, Orange County was unable to get out from under all its debts in a federal bankruptcy, and Vallejo is still struggling to emerge from bankruptcy court after two years.

A state-supervised program, on the other hand, could reassure the bond markets that a town is not trying to repudiate its debts.

“What it is doing is providing a supervising adult, where the municipality has to report to someone,” Mr. Spiotto said. “It means you have to address the issue and fix it, not put a Band-Aid over it.”

Until now, the municipal bond markets have paid little attention to smaller cities. Scranton, Pa., and East St. Louis, Ill., may continue to lumber along for years on state assistance, without harming their states’ abilities to borrow.

Many more towns could join them before bond investors get cold feet. Harvey, Ill., though not in a state conservatorship yet, may be headed there; its credit was recently downgraded to junk status, as was the rating of Central Falls, R.I., in May when it sought a court-appointed receiver. Toledo, Ohio, openly discusses a state receivership, as does Detroit.

But as more localities seek state assistance, the markets are starting to wake up.

The situation is particularly acute in Pennsylvania, where the flailing of a state capital has drawn considerable attention. Late last year, Reading joined the state’s distressed program. Ways to exit the program have often been elusive. Eleven municipalities have been in the state’s program for more than a decade. They were joined there five years ago by Pittsburgh.

Public finance experts say Pennsylvania’s “home rule” form of government, where tiny boroughs and townships have full municipal powers, make the problem knottier. If one local government takes the bitter medicine and raises taxes, residents can dodge the increase by moving a few blocks away.

The state undertook some financial reform in the 1980s, when a number of municipal pension funds failed. It began requiring all towns to make minimum pension contributions, and to make sure, it promised to send them the money each year.

Officials in Harrisburg said they saw no harm in using this year’s state pension money to pay their bondholders because they thought the municipal pension funds had a surplus.

But they see a surplus only because they are looking at a five-year-old number, said Bernard S. Kozlowski, deputy director of the state Public Employee Retirement Commission, which administers the state pension law. He said the state would eventually come after Harrisburg, demanding the missing money with interest. But not for at least two more years, he added, because of the lags built into the state system.