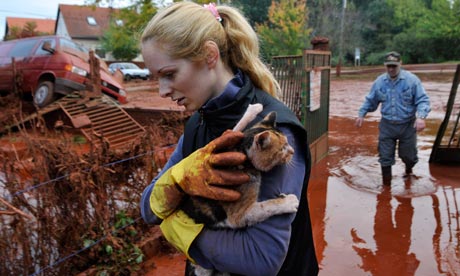 Tunde Erdelyi clings to her cat after toxic sludge from an alumina plant flooded her home in Devecser, Hungary. Photograph: Bela Szandelszky/AP

The Hungarian government has declared a state of emergency after a third person died today in flooding from a ruptured red sludge reservoir at an alumina plant. Six people were missing and 120 injured in what officials said was an ecological disaster.

The sludge, a waste product in aluminum production, contains heavy metals and is toxic if ingested. Many of the injured suffered burns as the sludge seeped through their clothes. Two of the injured were in life-threatening condition. An elderly woman, a young man and a three-year-old child were killed.

The chemical burns could take days to reveal themselves and what may seem like superficial injuries could disguise damage to deeper tissue, Peter Jakabos, a doctor at a hospital in Gyor where several of the injured were taken, said on state television.

The government declared a state of emergency in three western counties affected by the flooding. Several hundred tonnes of plaster were being poured into the Marcal river to bind the toxic sludge and prevent it from flowing on, the national disaster management directorate said.

Illes said the incident was an “ecological catastrophe” and it was feared that the sludge could reach the Raba and Danube rivers.

This morning, the sludge in Tunde Erdelyi’s house in Devecser was still 1.5 metres high and rescue workers used an axe to cut through her living room door to let the red liquid flow out.

“When I heard the rumble of the flood, all the time I had was to jump out the window and run to higher ground,” said a tearful Erdelyi.

Robert Kis, Erdelyi’s husband, said his uncle had been taken to Budapest by helicopter after the sludge “burned him to the bone”.

The flood overturned Erdelyi’s car and pushed it 30 metres to the back of the garden while her husband’s van was lifted on to a fence.

“We still have some copper in the garage that we could sell to make a living for a while,” Kis said as he attempted to appraise the damage. Erdelyi, a seamstress, was hoping the flood had spared the shop in town where she worked, her family’s main source of income.

The disaster agency said 390 residents had to be temporarily relocated and 110 were rescued from the flooded towns, where firefighters and soldiers were carrying out cleanup tasks.

Local environmentalists said that for years they had been calling the government’s attention to the risks of red sludge, which in a 2003 report they estimated at 30 million tonnes.

“Accumulated during decades … red sludge is, by volume, the largest amount of toxic waste in Hungary,” the Clear Air Action Group said, adding that the production of one tonne of alumina resulted in two tonnes of toxic waste.