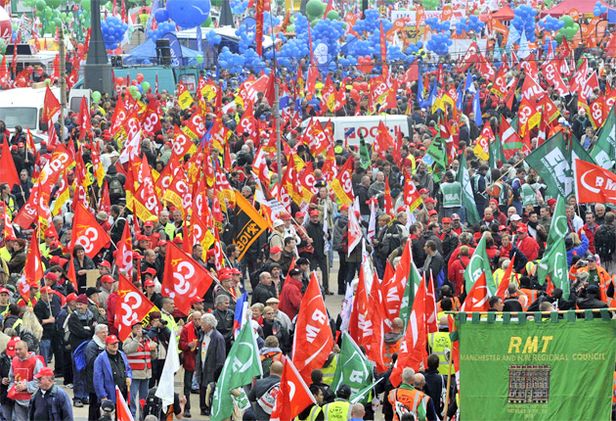 An estimated 100,000 demonstrators from all over Europe marched outside the EU institutions’ headquarters in Brussels

Workers across Europe yesterday vented their anger against government spending cuts and tax hikes that unions said would punish the poor.

Rallies were called in 13 capital cities and millions of Spanish workers went on strike in a mass action that hobbled public transport, paralysed building work and left streets littered with uncollected rubbish.

Some 100,000 workers, including German miners and Polish shipbuilders, brought Brussels to a standstill to protest against savage spending cuts they claimed would make workers the biggest victims of an economic crisis that they are blaming on bankers and traders in the financial markets.

The protest came as the European Commission said it would introduce measures to force EU governments to rein in their finances and reduce deficits, or face financial penalties.

Unions said that 10 million people joined the general strike in Spain. Many small businesses shut their doors in solidarity, flights were grounded, television stations cancelled programmes and strikers scuffled with police. Even the film director Pedro Almodovar suspended production on his latest project. During the morning rush hour, the streets of the Spanish capital were as empty as on a national holiday.

In Greece, hospital doctors stopped work for 24 hours and public transport was disrupted. In Slovenia, about half of public-sector workers remained on strike for the third day against a planned wage freeze. In Ireland, one man blocked the entrance to the Dail, the Irish parliament, with a cement truck in a protest against the country’s enormous bank bailouts. Written across the back of the lorry was: “All politicians should be sacked.”

Several EU governments have been pushed to the brink of financial collapse and have been forced to impose punishing cuts in wages and pensions to trim their debts, which has in turn led to increasing union discontent.

EU unemployment is running at nearly 10 per cent and at about twice that rate in Spain, Latvia and Estonia. In Spain, union leaders called the strike in an effort to persuade the socialist Prime Minister, Jose Luis Rodriguez Zapatero, to modify a labour reform package he rushed through the legislature in May to quieten market jitters about Spain’s ballooning deficit.

The package included highly unpopular measures, such as salary cuts for public workers, pension freezes, a higher retirement age and cheaper firing costs. He sprang them on the disbelieving unions this spring following pressure from the EU and international investors, who feared Spain could need a Greece-style bailout.

Before then, the Prime Minister, a card-carrying union member, had portrayed himself as a champion of workers’ rights. The about-face was so dramatic that union leaders recently dubbed him an “avatar” of his former self.

“If the government doesn’t want to commit suicide, it must rectify its policy,” said Ignacio Fernandez Toxo, secretary general of the national trade union CCOO, which estimated that 10 million people, or 70 per cent of the labour force, went on strike. The government claimed that only 7 per cent of civil servants stayed home, according to its initial reports.

“We’re going to lose a lot,” said Angel Martinez, a 50-year-old bus driver in Madrid. “If we don’t stay alert, this is just going to be the beginning with worse to come. We’ll have to have a general strike every day.”

Yesterday’s general strike, the first since 2002 and the seventh in the history of democratic Spain, is widely considered a test of the Prime Minister’s resolve to push ahead with the planned reforms. The strike was mostly peaceful, but some bands of picketers threw eggs at buses, burned containers and blocked trucks from delivering produce to wholesale markets. At least 11 strikers were reported injured in scuffles with police and more than 65 people were arrested. In Barcelona, entrenched activists, known as okupas, or squatters, used the occasion to clash with police in the city centre.

But some seemed already resigned to belt-tightening. “It’s a done deal,” said Enrique Morente, a Madrid doorman. “Now isn’t the time for a strike. What we need to do is recover from the economic crisis.”

Economic growth has revived in the EU, home to 500 million people. Its executive, the European Commission, expects the bloc’s economy to grow 1.8 per cent this year after a 4.2 per cent contraction in 2009. “We want to make sure that it’s not just the bond markets that are being listened to, that the governments don’t follow austerity packages that plunge us into a social crisis,” said John Monks, head of the European Trade Union Confederation.

Trade unionists threw petards and blew whistles as they marched through Warsaw demanding an end to ‘abuse by economic elites’.

A protester blocked the entrance to Leinster House with a cement truck bearing the slogan ‘Anglo-Toxic Bank’; its number plate read ‘bankrupt’.

Ten million workers stayed at home for the nationwide strike. There were 11 reported injuries and 65 arrests during clashes with police.

Rail workers and doctors walked out yesterday in protest at deep cuts into workers’ allowances, which are designed to reduce the national deficit.

By Anita Brooks in Madrid and Vanessa Mock in Brussels
Thursday, 30 September 2010