Pakistani authorities blocked a vital supply route to Nato troops fighting in Afghanistan on Thursday in retaliation for a cross-border US helicopter raid which killed three Pakistani soldiers. 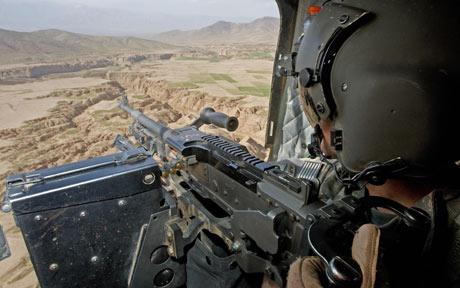 Two helicopters crossed the border and shelled an area in Teri Mangal village for about 25 minutes Photo: AFP/GETTY IMAGES

The attack on a border post was the fourth skirmish along the flashpoint this week, and came after an unprecedented number of drone missile strikes into the tribal regions had already inflamed anti-American feeling.

Hours after the raid, Pakistani officials closed the main Torkham border crossing to the hundreds of Nato supply lorries which cross daily into Afghanistan.

Pakistan said it would “protect its sovereignty in all circumstances”, while Rehman Malik, interior minister, said: “We will have to see whether we are allies or enemies.”

America has intensified its war on militants acting from inside Pakistan after apparently becoming frustrated with Islamabad’s refusal to target them.

He said: “Pakistan being a front-line ally in the war against terror expects its partners to respect its territorial sovereignty.”

Allegations in a new book by Bob Woodward, the Watergate investigative reporter, that a covert, CIA-trained army of Afghans carries out raids inside Pakistan have added to tensions.

Publicly Islamabad decries US violations of its sovereignty, but the country is heavily reliant on aid from Washington.

The Pakistani military said Thursday’s air strike at 5.30am targeted a checkpoint 200 yards inside Pakistan in the Upper Kurram tribal area, where six soldiers of the paramilitary Frontier Corps were stationed.

The troops fired warning shots at the two helicopter gun ships “after they appeared to have crossed the border”. The helicopters fired missiles back, killing three and wounding the others.

Nato forces conveyed “sincere condolences” to the families of the dead and the Pakistani military, but said they had acted in self-defence.

A spokesman in Kabul said troops had spotted what they believed was a group of insurgents setting up mortars to fire on a Nato coalition base in the border area of Dand Patan district, Paktia province.

Helicopter gun ships fired on the men, who were in Afghanistan, and the aircraft strayed into Pakistan’s airspace.

The helicopters later found themselves under small arms fire and “operating in self-defence, the aircraft entered into Pakistani airspace killing several armed individuals”.

The two skirmishes were being investigated, she said.

Earlier this week, helicopters fired into Pakistan in pursuit of several insurgents who had fled from Afghanistan.

A lengthy closure of the Torkham crossing to Nato traffic would strain supply routes into Afghanistan. Up to three quarters of Nato supplies, including food and fuel, pass through the post via the Khyber pass from the sea port at Karachi.

The vulnerability of the route, which is frequently attacked and looted by militants, has driven Nato commanders to try to shift to a northern route through Russia and central Asia.

By late Thursday, a queue of more than 150 lorries and oil tankers had formed at the post.