Prepare for collapse and become self-sufficient!

Interest rates are being held down to discourage savers, financial chief admits 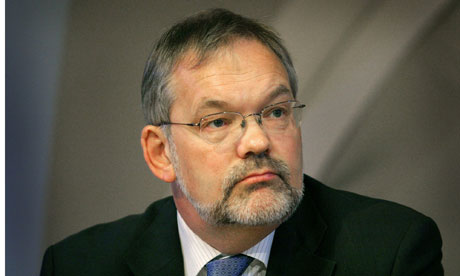 Britons should go out and spend to help invigorate the UK’s economic recovery, the deputy governor of the Bank of England has urged. In unusually unguarded comments for a banker, Charlie Bean yesterday discouraged people from building up cash savings which generate little income due to historically low interest rates.

Bean, who sits on the Bank’s monetary policy committee that set the base interest rate, admitted it was being held down in the hope families would use their cash and thereby help reflate the economy.

Low interest rates could persist for several years, he said. They have been at 0.5% for a year and a half. The next monthly rate-setting decision is due next week.

The record low rates help mortgage-holders, particularly on tracker deals, but make life difficult for people who rely on income from savings, many of whom are pensioners. Official statistics suggest borrowers have gained by £26bn, while savers have lost £18bn in reduced interest.

“What we’re trying to do by our policy is encourage more spending,” Bean told Channel 4 News. “Ideally we’d like to see that in the form of more business spending, but part of the mechanism that might encourage that is having more household spending; so in the short term we want to see households not saving more but spending more.”

The deputy governor said: “I think it needs to be said that savers shouldn’t necessarily expect to be able to live just off their income in times when interest rates are low. It may make sense for them to eat into their capital a bit.”

Many of those facing a squeeze because of lower rates were “older households [which] have actually benefited from the fact they’ve seen capital gains on their houses. “It’s very much swings and roundabouts. At the current juncture, savers might be suffering as a result of bank rate being at low levels, but there will be times in the future (as there have been times in the past) when they’ll be doing very well out of the fact interest rates are at a relatively high level. I think that’s something that savers should bear in mind.

“Savers shouldn’t see themselves as being uniquely hit by this. A lot of people are suffering during this downturn.”

Asked if near-zero interest rates were now “the new normal”, Bean said: “I would certainly not expect the level of bank rates to stay very close to zero for a decade or more.”