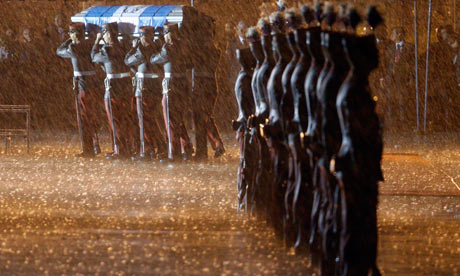 Soldiers carry the coffin of one of 72 migrants killed by drug traffickers in Tamaulipas, Mexico, last month. Photograph: Reuters

A small army of bloggers and tweeters is filling the gaps left by traditional media in Mexico that are increasingly limiting their coverage of the country’s drug wars because of pressure from the cartels.

“Shots fired by the river, unknown number of dead,” read one recent tweet on a busy feed from the northern border city of Reynosa, #Reynosafollow. “Organized crime blockade on San Fernando road lifted,” said another. “Just saw police officers telling a group of narcos about the positions of navy checkpoints,” ran a third.

Nothing of this kind appeared in the city’s papers which, along with most media outlets in the north-eastern state of Tamaulipas, have become better known for what they do not publish than for what they do.

Tamaulipas is one of the most intense battlegrounds of the drug wars being fought in Mexico between the federal forces and at least seven cartels.

Gun fights lasting hours, grenade attacks in shopping streets, military swoops on suspected kingpins – all ignored. Six local journalists in one city disappeared in two days, and there was hardly a word from their terrified colleagues.

One editor on a regional paper – who does not want to be named for security reasons – has meticulously followed directives from the dominant local traffickers ever since a story she published about a shoot-out, based on an official report, earned her a death threat a couple of months ago.

She does not even dare complain too openly about this to colleagues, in case they are in the pay of the gang. But every now and then she cannot resist tweeting. “Sometimes the emotion of a story gets to me and I put it on Twitter,” she says. “Especially when I know it won’t get out otherwise.”

Earlier this month, she revealed the kidnapping of a former local mayor who is also a cousin of Mexico’s biggest media magnate.

This reporting is not just the preserve of citizen journalists and frustrated reporters, all too aware that at least 30 Mexican journalists have been killed or disappeared since the drug wars began in December 2006. There are also plenty of rumourmongers, official sources, and cartel propagandists.

El Blog del Narco was set up in March and posts the information, photographs and videos it receives unedited and without comment.

The result is a catalogue of horror absent even from the national press, which still covers the violence from the relative safety of its headquarters in the capital.

Offerings last week included a video of the interrogation and execution of four alleged hit men, photographs of a car found in a Pacific coast resort with two heads on the roof – the headless bodies were on the back seat – and the army’s discovery of a torture house about an hour’s drive from Mexico City. Much of the material comes from the cartels themselves, but in an email interview with the Guardian, the anonymous administrator insisted he has no direct relationship with them.

“We just publish the information,” he wrote, adding that the blog sometimes receives 4m visits a week.

“Blog del Narco grew because the media and the government are trying to pretend that nothing is happening in Mexico.”

This is not quite true. At least not yet. Although regional media in all the hot spots are resorting to some degree of self-censorship, the extent varies from front to front.

Journalists in the infamously violent border city of Ciudad Juárez have long ago reduced their investigations, but they still cover the daily murders and massacres in detail.

Some say the unusually high number of outlets in Juárez are just too hard to control, others point out that the city’s warriors are often happy to publicise their crimes. But many wonder whether the rules of the game are now changing even in Juárez.

The city’s biggest paper, the Diario de Juárez, responded to the recent murder of one of its photographers with a front page editorial appealing to organised crime for advice on how to avoid more deaths among its staff.

“We need you to explain to us what you want us to publish and what not,” it said.

If the answer turns out to be silence, the experience elsewhere in Mexico suggests there will be plenty of twitter feeds and blogs ready to occupy the information vacuum they leave behind.