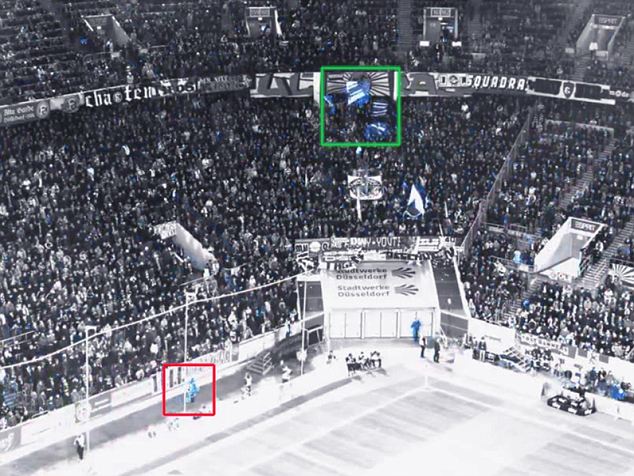 Separating jubilant fans from scuffling hooligans at a football match is difficult even for the most experienced security personnel.

And  constantly scanning live CCTV footage looking for trouble can be tiring.

But a new ‘intelligent’ CCTV camera that works just like the human eye promises to be able to spot trouble in large crowds.

The Smart Eyes device records and analyses a scene in real time and flags up anything that is out of the ordinary to a human operator.

Just like the human eye Smart Eyes is able to distinguish different objects, even if they are moving on front of a busy background.

‘That is invaluable for video surveillance of public buildings or places’, said Dr. Martina Kolesnik, research scientist at the Fraunhofer Institute for Applied Information Technology, which developed the system.

‘In certain circumstances the capabilities of a human observer are limited.

‘Ask someone to keep an eye on a certain stand in a football stadium and they are bound to miss many details.

‘That same person can only carefully monitor certain sections of the whole area and will quickly get tired. That’s where Smart Eyes clearly comes into its own.

Like human eyes, these can fix on and follow various points very quickly in succession – but also zoom in on details. At the heart of Smart Eyes is innovative software that automatically analyses the image sequences.

It replicates key strategies of the human eye and brain. It is able to calculate the degree of movement for each pixel, which allows it to identify the particular active areas in each scene.

From this it learns motion patterns and stores them as typical models. On the basis of these models the system then identifies events and classifies them: for instance the software can distinguish between passive spectators and fans jumping up and down.

Image patterns such as empty seats or steps are also identified. The application picks out events that are of interest and focuses on these using the cameras.

Depending on the priorities set by the security experts, various events are designated as important. The program can, where necessary, filter out objects such as flags being waved to focus specifically on other objects, for instance a person on the edge of the pitch.

‘Our image analysis software is compatible with camera systems produced by all vendors. It can be installed easily. The user doesn’t have to make any adjustments’,  Dr Kolesnik said.