The family of Hamid Karzai, the Afghan president, has been linked to more than a dozen expensive homes in the Gulf, raising fears that Western aid money sent to Afghanistan is being misused. 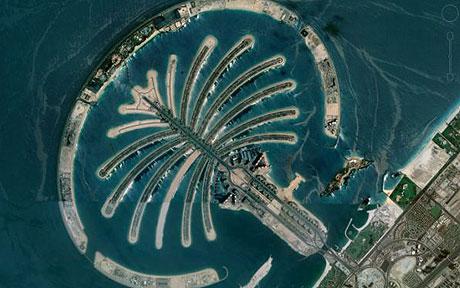 The centrepiece of the holdings is a portfolio of 14 villas on the Palm Jumeirah Photo: GOOGLE EARTH

The Daily Telegraph today reveals a property empire in Dubai assembled at a cost of £90 million that is owned or occupied by close relatives and associates of Mr Karzai.

The property holdings emerged as Mr Karzai, who leads one of the world’s poorest and most deprived countries, has struggled to salvage Afghanistan’s biggest private bank, Kabul Bank, which bankrolled the purchases.

The centrepiece of the holdings is a portfolio of 14 villas on the Palm Jumeirah, Dubai’s showpiece property development, registered in the name of Sher Khan Farnood, the former chairman of Kabul Bank. Kabul Bank also owns an apartment, two business plots and a loss-making airline, Pamir Airlines, in Dubai.

Mahmoud Karzai, President Karzai’s brother and the third-largest shareholder in the bank, like Mr Farnood, 46, occupies a “Signature” villa valued at up to £4 million. Other properties are valued between £3 million and £1 million.

He also made a £500,000 profit following the sale of a Dubai bought with a loan from Kabul Bank.

Mahmoud Karzai is not the only member of an Afghan political family living in villas distributed across the development where David Beckham, Michael Schumacher, Brad Pitt and Angelina Jolie are also owners.

Haseen Fahim, another Kabul shareholder and the brother of the ex-warlord vice-president, Mohammed Qasim Fahim, lives nearby.

Senior British government ministers are privately furious that Kabul Bank has been used to buy property in the Gulf.

Ministers will not directly comment on the Karzai family over its business interests, but MPs said the apparent corruption in Kabul is undermining Western attempts to stabilise the country.

Adam Holloway, a Conservative member of the Commons defence committee, said: “A lot of people have become very rich on money that was supposed to help Afghanistan.”

The Afghan government relies on international aid to provide more than half of the revenues it uses to finance public sector wages. President Karzai ordered that all salaries of 250,000 government employees, including teachers, medical workers and security forces, would be paid by direct debit to accounts with Kabul Bank two years after it was established in 2006.

Mr Farnood occupies a grand villa adorned at the front with statues of Roman legionaries, manicured lawns on all sides, a sweeping beachfront and a swimming pool in the back garden.

A Mercedes SUV sits in the driveway.

His current status is unclear. The poker-playing former exile resigned last week under orders to hand back the Dubai properties but he has not been charged with any offence.

Kabul Bank, which runs the payroll for Nato-backed security forces, has been deserted by thousands of depositors since the country’s Central Bank launched an investigation.

For his part Mr Karzai is thinking of moving on from the villa because his children have gone abroad to study and he is highly critical of his former partner’s failure to avoid the pitfalls of the boom. “The property here in Dubai was another big mistake. Sher Khan did it single-handedly. The thing is, he’s not sophisticated enough for today’s global economy,” he said.

There could be worse to come, he added, pointing to the still unvalued cost of the investment in Pamir Airlines and other ventures. “These two were running the bank,” he said. “They made risky investments, lending over the limit… it was hopeless.”