Annual food inflation could reach 7 per cent later this year, a leading City economist has warned. 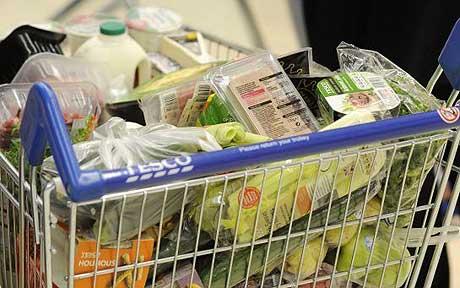 The Food and Agriculture Organisation food index, which measures prices of meat, dairy products, cereals, oils and fats, and sugar on a monthly basis, rose 22pc in August.

The jump, from 1.7 per cent in June, is likely if global food commodity prices continue to rise, said Simon Ward, chief economist at Henderson.

Rising food costs could have the effect of pushing up the consumer prices index (CPI), the official measure of inflation, to 4 per cent – double the Bank of England’s 2 per cent target, warned Mr Ward.

The impact on household budgets could even persuade the Coalition to cancel its planned rise in VAT, he added.

“Such an increase [in food prices] would hit consumer spending and recovery prospects and could destabilise inflationary expectations,” said Mr Ward.

“This could warrant postponing or cancelling the coming VAT hike.”

The Food and Agriculture Organisation food index, which measures prices of meat, dairy products, cereals, oils and fats, and sugar on a monthly basis, rose by an annual 22 per cent in August, the fastest rate since September 2008.

According to the British Retail Consortium, wheat prices alone have risen by 60 per cent over the past 12 months following crop failures in Russia and its subsequent ban on exports.

That has had a direct impact on the prices of foods containing wheat, but also on the cost of animal feed which in turn is pushing up meat prices.

Simon Hayes, an economist at Barclays Capital, said that rising food prices were a reminder that Britain’s “inflation problem has not gone away”.

He forecast that official figures to be released on Tuesday would show that the CPI rose to 3.2 per cent in August, from 3.1 per cent in July.