“Floating Chernobyls-in-waiting” are coming to a sea near you after a major international agreement was signed last week, according to critics of nuclear power. 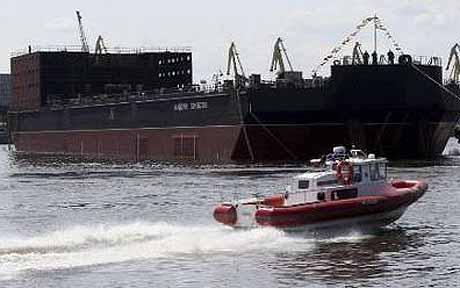 “It’s a case of Homer Simpson meets the Titanic,” says Ben Ayliffe, a senior climate campaigner at Greenpeace. “The idea is just mind-boggling.”

Unsurprisingly, he is appalled by the idea.

Russia has been planning floating reactors for quite some time, but reached a recent milestone when the hull of the Akademik Lomonosov was launched into the Baltic Sea.

The reactor is not complete, but the barge that will house the plant was launched on June 30 at the Baltyskiy shipyard in St Petersburg – and China has been watching developments very closely indeed.

Floating reactors can be used in inaccessible places where there is no electricity grid – including exploring for oil in the Arctic or Antarctic.

The current aim of the projects is to create “a reference plant to become an innovative product for the international market,” Rosatom said. “Adding a desalination capability to an energy system… promises an additional improvement in the project’s economics when deployed in localities with scarce fresh water supplies,” the nuclear body added.

This statement is clearly aimed at Middle Eastern nations that are flush with petrodollars.

As well as providing power in remote locations without having to build a vast grid system, nuclear energy can be used in the energy-intensive desalination of water.

The population explosion that is widely expected in the coming decades is largely going to happen in developing countries.

The Middle East has a structural shortage of water – one of the most vital commodities – and floating reactors could provide an answer to this problem.

The water issue is intrinsically linked to current concerns about a looming food crisis, as well as providing potable water. The Middle East has been a net importer of food since the 1970s – so a ready supply of fresh water would be strategically important – and nuclear desalination has been proved to work in areas as far apart as California and Kazakhstan.

But environmentalists remain far from convinced of the benefits.

“There is an inherent risk with any nuclear plant… but you multiply the risk significantly by towing the plants to the Middle East or to remote areas,” Mr Ayliffe argues. “Then there’s the intractable problem of nuclear waste in an age of heightened security,” he adds. “It’s incredibly rash.”

Greenpeace understands that there will be issues in providing fresh water to a growing population in the future, but believes that there are other ways of generating electricity.

Mr Ayliffe also pointed out that a major proposed use of the Russian reactor is to help explore for oil in remote areas. “We are using risky reactors to continue our dependency on oil,” he said.

The floating reactor should be ready late in 2012 and it will have the capacity to produce 80 megawatts of electricity.

Mr Kiriyenko said at least six potential sites for such plants had already been chosen in northern Russia.

However, the history of Soviet-era nuclear accidents has prompted some critics to refer to the reactors as “floating Chernobyls-in-waiting” after the meltdown at the plant in Ukraine in 1986. The accident is the only example of a “Level 7” event on the International Nuclear Event Scale – the maximum level that can be reached. The scale was introduced by the International Atomic Energy Agency in 1990. It is a logarithmic scale, similar to the Richter Scale for earthquakes. The fire at Windscale, now Sellafield, in the 1950s would have been classified as a Level 5 event.

China is making a big push for nuclear power and is testing different nuclear technologies from France, Canada, Russia and the US.

According to the World Nuclear Association’s reactor database, China had 12 operating reactors on August 1 this year, with 24 under construction. A total of 33 reactors are going through the planning stage, with a further 120 facilities proposed.

The new accord between Russia and China means that projects such as the Akademik Lomonosov will be accelerated. As the world’s thirst for energy continues, a new threat has emerged on the high seas. Despite the benefits, concern remains that these new plants will be a magnet for terrorists or pirates.

Forget Naomi Campbell and blood diamonds – the next big crackdown will be on “blood minerals” such as tantalum, cobalt and tungsten.

An amendment in the new US financial reform bill, the Dodd-Frank Act, will require US-listed companies to disclose whether their products contain “conflict minerals” from the war in the Democratic Republic of Congo.

The minerals are used in mobile phones, laptops and digital cameras – leading to them being called “genocide phones”. Under the new law, any US-listed group using these minerals will be required to state each year whether they can be traced back to the troubled African country.

The rally in corn prices looks likely to continue for the next month, according to alternative investment specialists Castlestone Management.

Prices have rallied in tandem after the Russian wheat crisis rocked soft commodity markets, but Castlestone reckons that this is only one part of the reason for the latest surge.

It says that higher ethanol prices had encouraged refiners to snap up supplies, while exports to China remain strong. Corn futures have rallied by 35pc since their June 29 low.