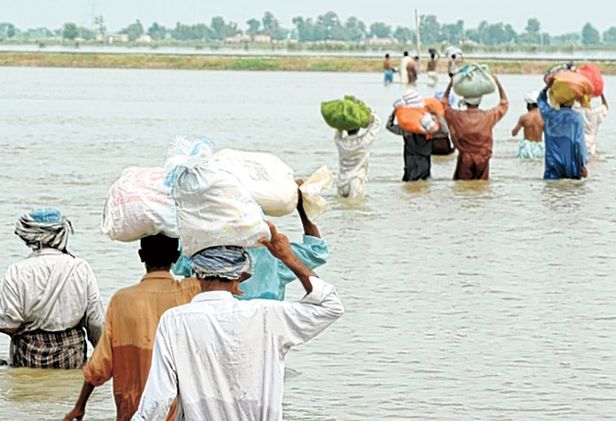 Pakistanis displaced by the floods return to their homes in Shikapur, in Sindh province

A senior Pakistan diplomat has accused “powerful” figures of diverting floodwaters into unprotected areas to save their own land.

Abdullah Hussain Haroon, Pakistan’s representative to the UN, has called for an inquiry into a “handful” of cases where influential people took “advantage of these floods and saved themselves” in a disaster that has left more than 1,600 people dead.

Mr Haroon, one of a number of senior officials including a former prime minister who have made the allegations, called for a full judicial inquiry amid claims that unprotected villages had been swamped, forcing the inhabitants to abandon their homes.

However, he said the incidents of embankments being breached by a few influential figures should not hamper the international effort to help the millions affected by the flooding.

The International Monetary Fund said yesterday that it will give Pakistan £290m in emergency aid over the coming weeks. The IMF’s managing director, Dominique Strauss-Kahn, said yesterday that discussions on repayment of a £7.1bn loan would continue.

The announcement came amid continuing pressure on Pakistan over its handling of the unprecedented floods that have affected more than 18 million people and caused nearly £28bn of damage to infrastructure and agriculture, the mainstay of the economy.

Mr Haroon denied mismanagement of the relief effort, instead blaming a few people in powerful positions. “Over the years, one has seen with the lack of floods that those areas normally set aside for floods have come under irrigation of the powerful and the rich,” Mr Haroon told the BBC.

“It is suggested in some areas, those to be protected allowed… levees to be burst on opposite sides to take the water away. If that is happening, the government should be inquiring and be answerable to its own people.”

The controversy has surfaced in various parts of the country. Former prime minister Mir Zafarullah Khan Jamali has alleged that water was diverted to submerge his lands in Balochistan province to protect an airbase he said the Americans were using near the town of Jacobabad. The authorities deny the claim. The US Embassy in Islamabad has denied that the American military uses the Shahbaz airbase.

In southern Punjab, prominent figures from the party of former prime minister Nawaz Sharif, which heads the Punjab government, were accused of using their influence to divert water from the land of a clan headed by two senior regional politicians. The breach allowed water to flow into Muzaffargarh, a town which has now been abandoned. The clan denied the claim.

Sindh province has seen landowners revive local rivalries by diverting water to each other’s land in order to preserve their own crops. The allegations also involve a senior government minister. Landowners in Sindh told The Independent on Sunday that Khurshid Shah, a federal minister from the town of Sukkur, had ordered an embankment to be cut on the wrong side, stopping the water from being diverted into the Thar Desert and onward to the Arabian Sea.

But senior government officials deny any such move. At the time, Qaim Ali Shah, the chief minister of Sindh rejected suggestions that water diversion had been mismanaged. “The water is king,” he said. “Wherever it wishes to go, it is its own decision.”