– Bolivia: Over 1 Million of Dead Fish and Thousands of Alligators, Turtles, Dolphins and Other River Wildlife are Floating Dead in Rivers 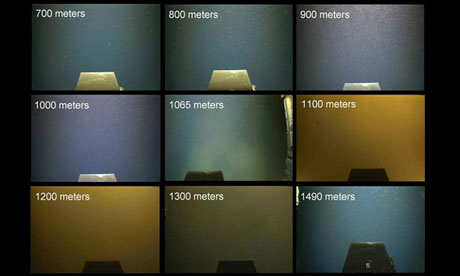 Images taken during the descent of an underwater vehicle show oil droplets appearing at a depth of 1065-1300m. Photograph: Ho/AFP/Getty Images

Scientists have mapped a 22-mile plume of oil droplets from BP’s rogue well in the depths of the Gulf of Mexico, providing the strongest evidence yet of the fate of the crude that spewed into the sea for months.

The report offers the most authoritative challenge to date to White House assertions that most of the 5m barrels of oil that spewed into the Gulf is gone.

“These results indicate that efforts to book-keep where the oil went must now include this plume,” said Christopher Reddy one of the members of the team from Woods Hole Oceanographic Institute.

The report, which is published in the journal Science, also said the plume was very slow to break down by natural forces, increasing the likelihood that oil could have travelled long distances in the Gulf before it was degraded.

“Many people speculated that subsurface oil droplets were being easily degraded,” said Richard Camilli, the lead author of the paper. “Well we didn’t find that. We found it was still there.”

At the heart of the debate is the rate at which naturally occurring microbes have consumed the oil from the runaway well. Even by the White House estimates, about one quarter of the oil was siphoned away from the well, skimmed off the surface, or burned. But the White House, in a high-profile briefing, earlier this month suggested that microbes had eaten as much as 50% of the remaining oil.

The study reinforces earlier reports from research voyages led by scientists from the University of Georgia and Texas A&M University who detected the presence of deepwater plumes of oil.

But the authors argued that theirs was more authoritative as it is the first to be published in a major peer-reviewed journal since oil began pumping into the ocean from the broken well four months ago. The authors also noted their access to superior technology including one of the few underwater robots available outside the oil industry.

According to their findings the deepwater plume measures 22 miles long, 1.2 miles wide and 650 feet high.

The team took around 57,000 samples from the plume during a 10-day research voyage at the end of June. It found that the plume was not made up of pure oil but a combination of toxic oil compounds including benzene and xylene.

The study puts the White House and government scientific agencies in an increasingly awkward position after a high-profile announcement two weeks ago that the oil was broken down or had been cleaned up.

A team led by the National Oceanographic and Atmospheric Administration (NOAA) reported that just over a quarter of the 49m barrels of oil remained in the Gulf as a light sheen on the surface or degraded tar balls washing ashore.

It also raises new questions about the strategic decision taken by the Obama administration to use nearly 2m gallons of chemical dispersant Corexit to break up the oil, including some on the ocean floor 5,000 feet below the surface.

The administration faces further pushback today in a congressional hearing on the fate of the oil and the safety of seafood from the Gulf.

Ian MacDonald, an oceanographer at Florida State University, said the White House accounting for the oil is misleading and that only 10% of the oil that spewed into the Gulf has been removed from the ocean. Jane Lubchenco, the NOAA chief and herself a marine scientist, has stood by the government estimates.