[Blagojevich’s *actual* crime: Trying to get cheap prescription drugs for seniors and being a man of the people. Notice dirtbag Patrick Fitzgerald has stated that he wants to retry Blago — but gave Cheney – a war criminal – a pass? As Dylan Ratigan asked on his MSNBC program earlier today (paraphrasing) ‘Shouldn’t Barack Obama be arrested, for making back-door deals with the pharmaceutical industry?’ *Exactly.* –LRP] 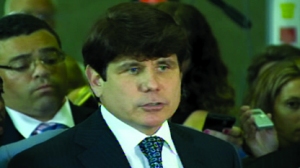 In Session has also confirmed that no plea deal is in the works at this point.

Another option would be for the judge to hold off on sentencing for now while the retrial goes forward. Blagojevich would then be sentenced at the same time for any and all counts he was convicted on.

Goldstein says the defense would hope the government would undertake a cost/benefit analysis when deciding whether to retry the case. He told In Session correspondent Jean Casarez, that several hundred letters were sent out to potential jurors back in March 2010. Finally a panel of 100-200 came to court for the voir dire jury selection process; the three to four day jury selection led to a two month trial.

Goldstein, who was in the courtroom with Blagojevich yesterday, told In Session that when it was announced there was a verdict, the jury said they were hung on 23 of the 24 counts. Judge Zagel made them exit and then declared a mistrial, but also recommended the next court date be September 6, 2010.

The government then announced, Goldstein said, they absolutely will retry the case and would retry “tomorrow” if possible. At that point the judge set the next court date for August 26th.

Rod Blagojevich faced a total of 24 counts in U.S. District Court in the Northeastern District of Illinois. His brother Robert was charged with four counts in the indictment. The jury only found the former governor of Illinois guilty of count 24, making a false statement. Judge Zagel declared a mistrial on all the other counts.