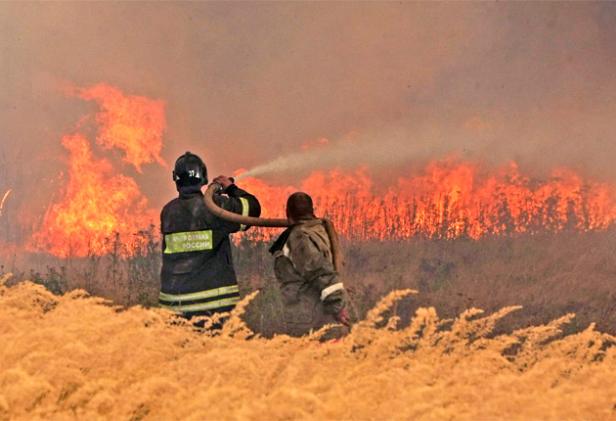 Activists said that the effect of the flames, fanned by the hottest weather in the region in 1,000 years, is bound to be serious. “This is radiation that will be dangerous for the local population living near the fires and firefighters managing the fires,” said Vladimir Chuprov, head of Greenpeace Russia’s energy unit. “What is not clear is what could be the danger of the combined radiation effect and toxic effect of the smog. No one knows how these effects multiply each other.”

If the weather situation changes, particularly with heavy winds, the toxic smoke could blow westward, he warned. However he added: “Moscow and the EU states are out of the risk zone.”

Radioactive residue from the explosion at Chernobyl, a massive nuclear power plant in Ukraine, continues to line the earth in Ukraine, Belarus and western Russia. Experts have been warning for more than a week that the fires that have blanketed much of western Russia in thick smoke could stir nuclear debris from the accident, adding a potentially deadly pollutant to the carbon monoxide-thick smog.

But as officials admitted that the fires had reached areas affected by fallout from the 1986 nuclear explosion, they insisted that there was no reason to panic.

On Tuesday, Russia’s chief sanitary official, Gennady Onishchenko, criticised environmentalists for raising alarm over the nuclear issue. “There is no need to sow panic,” he said. “Everything is fine.” (Sure!)

And the Russian emergencies ministry said it had increased forest patrols around Bryansk, the western region that lies close to Chernobyl, and that its efforts to battle the flames there were largely successful. “There is a danger, but we are controlling the situation,” said Vladimir Rozinkevich of the Bryansk forest protection service.

The local emergencies ministry in Snezhinsk, the site of a major nuclear research centre, said the fires there had been extinguished by yesterday. Yet fires still threaten Mayak, a major nuclear storage and reprocessing site in Chelyabinsk, where a nuclear accident in 1957 also left the grounds littered with nuclear residue.

Russians are, however, growing weary of official statements. The Kremlin has a long history of downplaying disasters in a bid to appear in control. State-run television has focused on official efforts to battle the flames. On Tuesday, it aired footage of the Prime Minister, Vladimir Putin, co-piloting a firefighting jet and pressing a button to spill 24 tonnes of water over burning land. Vedomosti, a leading business daily which usually strives to appear apolitical, lambasted the move in an editorial yesterday, saying: “This is tunnel vision of the PR-men who believe that a TV picture of Putin behind the wheel of something is an eternal panacea.”

Mr Putin’s ratings, and those of President Dmitry Medvedev, have fallen as a result of the fires. One poll has put Mr Putin’s approval rating below 50 per cent. Yesterday, Mr Medvedev posted on Twitter: “I’ve been reading about how many of our people have taken it upon themselves to help fire victims. I do appreciate it.”

More than 600 fires continue to burn across Russia. The acrid smoke that has choked Moscow since Friday lifted yesterday, but weather officials warned it would likely return by the end of the week. Officially, 52 people have died in the fires, but with reports of several villages completely destroyed by the fires, many believe the final death toll will be much higher.

Some officials appear to have taken a blasé attitude to the crisis. Moscow’s mayor, Yury Luzhkov, remained on holiday for days before being called back to the capital earlier this week, and the head of the Moscow region forestry service remains on holiday.

More than 165,000 firefighting and emergencies officials have been deployed to tackle the flames, but they are equipped with dilapidated tools and are still sorely under-staffed.