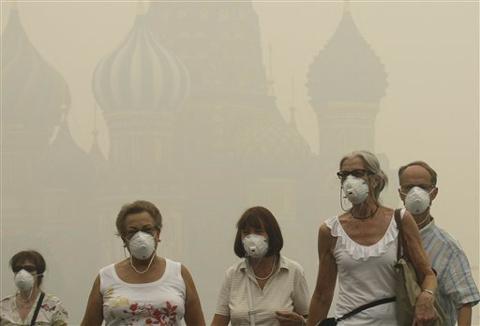 Tourists wear protective face masks as they walk along the Red square in thick smog, with Saint Basil’s Cathedral partially visible in the back, in Moscow, Russia, Friday, Aug. 6, 2010. The city of Moscow was shrouded Friday by a dense smog that grounded flights at international airports and seeped into homes and offices, as wildfires that have killed 50 people nationwide continued to burn.

Russia’s summer of heat, drought and fire is starting to take a human toll in Moscow, Europe’s most populous city.

Deaths in Moscow have doubled to an average of 700 people a day as the city struggles with a deadly combination of record hot temperatures and poisonous smog from wildfires.

Andre Seltsovky, Moscow’s health chief, blamed weeks of heat and smog for the jump in mortality compared to the same time last year.

The average death rate in the city during normal times is between 360-380 people a day, he said. Today, we have around 700.

He added that the city’s morgues are filled with 1,300 bodies, close to their capacity. In addition, he said, ambulance trips are up by almost one third, to 10,000 a day. And city officials have ordered 3 million face masks for the population, estimated to be 11 million.

The health department director’s comments broke days of official silence on the human toll in the capital. But within hours, Russia’s health minister, Tatyana Golikova, demanded an explanation for the statistics.

In face of the smog, several embassies in Moscow, including the American, cut their services Monday. Citing ‘hazardous levels of air pollution,’ the U.S. State Department issued a warning advising people planning to visit Moscow to carefully consider their plans. The warning expires Sept. 5.

Since Friday, smoke from wildfires has delayed or forced the cancellation of 64,000 flights in European Russia, Rosgidromet, the national weather bureau, reported Monday.

On Sunday, Moscow airports experienced a record exodus – 104,000 people flying out of the city. Travel agents report that package tours to destinations popular with Russians like Egypt, Montenegro and Turkey are completely sold out for next weekend.

At the heart of the smog is an infernal archipelago of 550 wildfires across central Russia. NASA estimates that they are pumping as much as 1 million tons of carbon monoxide into the air every day.

Without a wind, he said, the Moscow basin is filling up with automobile exhaust gases and the smoke of about 40 peat fires burning around the capital.

Forecasters say the pollution may decline on Wednesday with a wind from the west. To help Mother Nature, Russia’s national weather bureau, asked Moscow’s industrial enterprises to cut emissions by about one third through Wednesday afternoon. Health authorities have asked employers to give workers Tuesday off.

On the fire front, there is little room for optimism. The weather bureau expects another 10 days of African-style heat for European Russia – and no significant rain for the rest of August.

Alexander Frolov, head of Russia’s weather service, said Monday that historic records and the study of lake deposits indicate that this summer’s heat wave could be Russia’s worst in 1,000 years.

Speaking at a Moscow a news conference, he said: “This phenomenon is absolutely unique. We have an ‘archive’ of abnormal weather situations stretching over a 1,000 years. It is possible to say there was nothing similar to this on the territory of Russia during the last 1,000 years in regard to the heat.”

Health authorities say that living in Moscow these days is the equivalent to smoking a pack of cigarettes a day. In response, city officials have opened 123 air-conditioned rooms with filtered air – the pulmonary equivalent of a municipal network of non-smoking rooms.