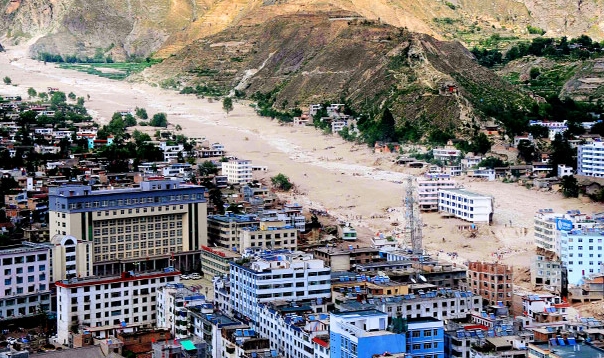 The number of people confirmed to have died after massive landslides in north-western China has risen to 1,117, with 627 others missing, officials say.

Hopes of finding survivors are fading and rescuers are turning their efforts to recovering bodies and preventing outbreaks of disease.

Rain is forecast for later this week, prompting fears of further landslides.

Heavy rain was already said to be falling in Zhouqu on Wednesday and as much as 90mm (3.5in) of rain was forecast for Friday, the National Meteorological Centre reported.

It said the chance of more landslides was “relatively large”.

Soldiers have been using explosives to blast through debris that partly dammed the Bailong river and created an unstable lake, which eventually overflowed and sent a wave of water engulfing the town of Zhouqu early on Sunday.

A 1km (0.6-mile) long drainage channel was bringing the water level down, the official Xinhua news agency quoted the vice-minister of water resources as saying.

“The danger of the barrier lake collapsing suddenly has been basically eliminated,” the vice-minister, Jiao Yong, told reporters in Beijing.

Meanwhile, specialists in epidemic prevention and medical workers have been sent to the area amid growing fears that contaminated water could spark an outbreak of disease, Xinhua reported.

Yang Long, a doctor running a makeshift clinic at a Zhouqu school, told the China Daily he had already treated several adults and children for diarrhoea.

“Unhealthy drinking water and food mainly caused the disease and we need more medicine,” he said.

One of the main problems facing the government is getting all those relief materials to where they are needed, the BBC’s Michael Bristow reports from Beijing.

The affected area is mountainous and has few roads. Some were blocked by landslides, while officials said others were congested with heavy traffic.

Correspondents also say the authorities face a growing problem of where to house survivors. More than 1,000 homes were damaged or destroyed and another 3,000 flooded.

More than 4,000 tents have been sent to Zhouqu county but the mountainous terrain means there is little open space to set up camps.

Earlier, Chinese Premier Wen Jiabao had urged rescuers to hurry before the weather worsened but he acknowledged the task would be difficult.

“We must fully realise the difficulties for the search and rescue work,” he said. “You must race against the clock and spare no efforts in saving lives.”

Though hopes of finding survivors are fading, a 50-year-old man was rescued from a flooded hotel located inside the barrier lake formed by landslide debris on Wednesday.

A 52-year-old man was pulled alive from the rubble on Tuesday, more than 50 hours after the disaster, and other rescue teams say they have heard “very faint” signs of life elsewhere, state media reported.