Obama: ‘I will promise you this, that if we have not gotten our troops out by the time I am President, it is the first thing I will do. I will get our troops home. We will bring an end to this war. You can take that to the bank.’ (Video)

US ‘casualties’ in Afghanistan soar to record highs 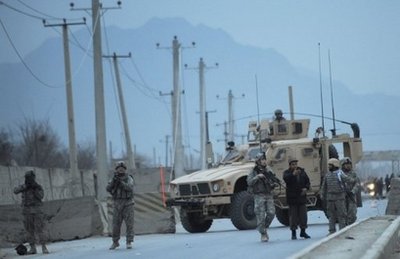 KABUL, Afghanistan – In a summer of suffering, America’s military death toll in Afghanistan is rising, with back-to-back record months for U.S. losses in the grinding conflict. All signs point to more bloodshed in the months ahead, straining the already shaky international support for the war.

Six more Americans were reported killed in fighting in the south – three Thursday and three Friday – pushing the U.S. death toll for July to a record 66 and surpassing June as the deadliest month for U.S. forces in the nearly nine-year war.

U.S. officials confirmed the latest American deaths Friday but gave no further details. Five of the latest reported deaths were a result of hidden bombs – the insurgents’ weapon of choice – and the sixth to an armed attack, NATO said in statements.

U.S. commanders say American casualties are mounting because more troops are fighting – and the Taliban are stiffening resistance as NATO and Afghan forces challenge the insurgents in areas they can’t afford to give up without a fight.

“Recent months in Afghanistan have … seen tough fighting and tough casualties. This was expected,” the top U.S. and NATO commander, Gen. David Petraeus, said at his Senate confirmation hearing last month. “My sense is that the tough fighting will continue; indeed, it may get more intense in the next few months.”

That forecast is proving grimly accurate.

The month has brought a sharp increase in the tragic images of war – medics frantically seeking to stop the bleeding of a soldier who lost his leg in a bombing, fearful comrades huddled around a wounded trooper fighting for his life, the solemn scenes at Dover Air Force Bare in Delaware when shattered relatives come to receive the bodies of their loved ones.

After a dip in American deaths last spring following the February capture of the southern town of Marjah, U.S. fatalities have been rising – from 19 in April to 34 in May to 60 in June. Last month’s deaths for the entire NATO-led force reached a record 104, including the 60 Americans. This month’s coalition death count stands at 89, including the 66 Americans.

Some U.S. military officers speculated that the spring drop in fatalities was due in part to the fact that many Taliban fighters in the south – the main focus of NATO operations – were busy harvesting the annual opium poppy crop, a major source of funding for the insurgents.

As the harvest ended and the pace of battle accelerated, more American troops were streaming into the country as part of President Barack Obama’s decision last December to dispatch 30,000 reinforcements in a bid to turn back a resurgent Taliban.

American troop strength stands at about 95,000, and by the end of August the figure is expected to swell to 100,000 – three times the number in early 2009. Commanders say more boots on the ground inevitably means more casualties.

With the additional troops, U.S. commanders have been stepping up the fight against the insurgents in their longtime strongholds such as the Arghandab Valley, Panjwaii and Zhari – all on the outskirts of Kandahar city, the biggest urban area in the ethnic Pashtun south.

Much of the fighting in those areas involves brief but intense exchanges of fire. NATO and Afghan patrols also must maneuver through fields often littered with homemade bombs, which have become the biggest killer of pro-government forces.

The Islamic holy month of Ramadan, which begins around Aug. 11, may provide some respite in the bloodletting because Taliban fighters and Afghan government forces will be fasting, although some commanders believe the insurgents will keep up the pace in areas where the coalition is trying to step up their own operations.

Fighting around Kandahar is part of a NATO strategy to secure the city, the Taliban’s spiritual birthplace where support for the insurgency runs deep. U.S. commanders have described Kandahar city as the key to controlling the Taliban’s southern heartland because of the city’s symbolic links to the insurgency.

As the U.S. and its allies step up pressure around Kandahar, Taliban resistance has also intensified in Helmand province to the west and in Zabul province to the east. Those three provinces account for roughly 70 percent of the U.S. deaths this month.

“We are going into places that have been significant support bases for the Taliban for the past several years, and they’re going to fight hard for those,” Lt. Gen. David Rodriguez, who directs day-to-day operations, said this month. “And that’s why we expect the casualties to go up.”

The rise in casualties is likely to erode support for the war in Washington and the capitals of the 45 other countries that provide troops – especially if NATO commanders are unable to show progress in curbing the Taliban. The Dutch are due to remove the last of their 1,600-member force at the end of this month, and Canada plans to remove its 2,700 troops next year.

Obama has promised to begin withdrawing U.S. troops in July next year with the pace to be determined by conditions on the ground.

At the same time, there are signs that Afghan patience with the presence of thousands of foreign troops is running thin.

In the capital, Kabul, police fired weapons into the air Friday to disperse a crowd of angry Afghans who shouted “Death to America!”, hurled stones and set fire to two vehicles after an SUV, driven by U.S. contract employees, was involved in a traffic accident that killed four Afghans, according to the capital’s criminal investigations chief, Abdul Ghaafar Sayedzada.

The contractor, DynCorp International, confirmed that its employees, working on a program sponsored by the U.S. Department of State, were involved in an accident on the main road to the Kabul airport. In a statement, DynCorp said that when its employees got out of their vehicle, they and other DynCorp employees, who arrived at the scene to help, were attacked by the crowd, which burned their vehicles.

“Our condolences go out to the families of those who were killed or injured,” DynCorp said. “An investigation is under way.”

People at the scene claimed foreigners fired shots, killing and wounding Afghan civilians. DynCorp said the contractors fired no shots and that Afghan police helped move the contractors to safety away from the crowd. Hospital officials said the deaths and injuries were caused by the traffic accident.

Ahmad Jawid, who also was at the scene, asked: “Are we not Muslims? Are we not from Afghanistan? Infidels are here and they are ruling us. Why?”