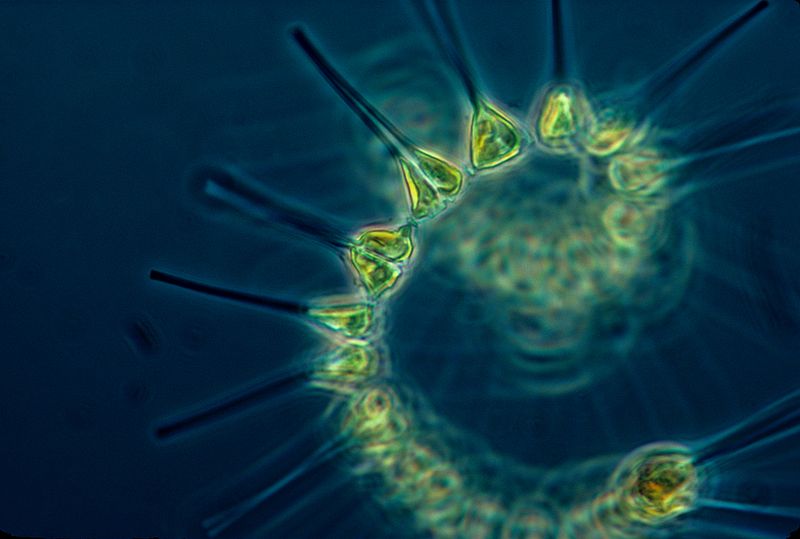 Phytoplankton are the foundation of the oceanic food chain.

WASHINGTON (AP) — Despite their tiny size, plant plankton found in the world’s oceans are crucial to much of life on Earth. They are the foundation of the bountiful marine food web, produce half the world’s oxygen and suck up harmful carbon dioxide.

And they are declining sharply.

Worldwide phytoplankton levels are down 40 percent since the 1950s, according to a study published Wednesday in the journal Nature. The likely cause is global warming (Since 1998 the world is cooling.), which makes it hard for the plant plankton to get vital nutrients, researchers say.

The numbers are both staggering and disturbing, say the Canadian scientists who did the study and a top U.S. government scientist.

“It’s concerning because phytoplankton is the basic currency for everything going on in the ocean,” said Dalhousie University biology professor Boris Worm, a study co-author. “It’s almost like a recession … that has been going on for decades.”

Half a million datapoints dating to 1899 show that plant plankton levels in nearly all of the world’s oceans started to drop in the 1950s. The biggest changes are in the Arctic, southern and equatorial Atlantic and equatorial Pacific oceans. Only the Indian Ocean is not showing a decline. The study’s authors said it’s too early to say that plant plankton is on the verge of vanishing.

“These tiny species are indicating that large-scale changes in the ocean are affecting the primary productivity of the planet,” said Burkett, who wasn’t involved in the study.

When plant plankton plummet — like they do during El Nino climate cycles— sea birds and marine mammals starve and die in huge numbers, experts said.

“Phytoplankton ultimately affects all of us in our daily lives,” said lead author Daniel Boyce, also of Dalhousie University in Halifax, Nova Scotia. “Much of the oxygen in our atmosphere today was produced by phytoplankton or phytoplankton precursors over the past 2 billion years.”

Plant plankton — some of it visible, some microscopic — help keep Earth cool. They take carbon dioxide — the key greenhouse gas — out of the air to keep the world from getting even warmer, Boyce said.

Worm said when the surface of the ocean gets warmer, the warm water at the top doesn’t mix as easily with the cooler water below. That makes it tougher for the plant plankton which are light and often live near the ocean surface to get nutrients in deeper, cooler water. It also matches other global warming trends, with the biggest effects at the poles and around the equator.

Previous plankton research has mostly relied on satellite data that only goes back to 1978. But Worm and colleagues used a low-tech technology — disks devised by Vatican scientist Pietro Angelo Secchi, in the 19th century. These disks measure the murkiness of the ocean. The murkier the waters, the more plankton.

It’s a proxy the scientific community has long accepted as legitimate, said Paul Falkowski of Rutgers University, who has used Secchi disk data for his work.

He and other independent scientists said the methods and conclusions of the new study made sense.