Weapons like ADS are not safe and destroy people’s health.

And weapons like ADS have already been used against Americans.

The US army says its new ‘pain ray’ hurts but does no lasting damage. Its critics would beg to differ. 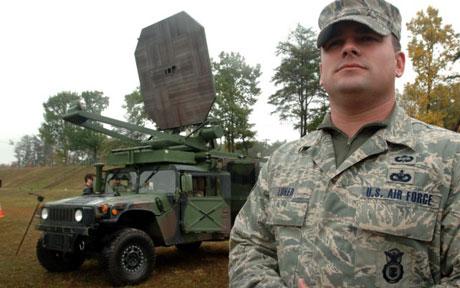 The Active Denial System or ADS, recently deployed for the first time in Afghanistan.

‘It was as if some invisible jet impinged upon them… I saw them staggering and falling, and their supporters turning to run.” Since the first appearance of the “heat-ray” in H G Wells’s The War of the Worlds, ray guns have been a staple feature of science fiction: the classic sign of overwhelming technological superiority. But they are no longer fiction. Last month, Lt Col John Dorrian admitted that the US military’s brand-new Active Denial System (ADS) had been shipped to Afghanistan, the first time it has been present in an active theatre of war. According to the top brass, it is a “non-lethal, directed-energy, counter-personnel weapon”. Among the troops, however, its favoured description is rather shorter: “the pain ray”.

Compared with most military vehicles, the device looks relatively harmless – like one of the broadcasting trucks you see outside big sporting events: an anonymous-looking military transport with what appears to be a square satellite dish mounted on top. But it contains an extraordinary new weapon, capable of causing immense discomfort from half a mile away without – its makers claim – doing any lasting damage.

The ADS works by projecting a focused beam of 3.2mm wave electromagnetic radiation at a human target. This heats the water and fat molecules on the skin, causing their temperature to rise by up to 50C. Philip Sherwell, a Sunday Telegraph reporter who tried out the ADS in 2007, describes it as “unbearably uncomfortable, like opening a roasting hot oven door”. The immediate instinct is to escape the beam and seek cover – at which point the effect subsides.

In some quarters, the ADS has been hailed as the future of crowd control. Kelley Hughes, a spokesman for the Pentagon’s Joint Non-Lethal Weapons Directorate (JNLWD), which oversaw its development, says that “the ADS provides our troops with our most advanced, non-lethal escalation-of-force option. It will support a full spectrum of operations ranging from non-lethal methods of crowd and mob dispersal, checkpoint security, area denial and clarification of intent.”

Although its operational parameters are classified, the JNLWD says that the ADS has a range of up to 500m, 10 times greater than current non-lethal weapons such as rubber bullets. The technology has been in development for two decades, and has cost well in excess of $60 million. Each device costs $5 million, and safety testing has been ongoing for 12 years.

Mindful of the terrible publicity Tasers and other crowd-suppression techniques have received, the JNLWD has been at pains to stress its emphasis on testing.

“There have been more than 11,000 exposures, on over 700 volunteers,” says Hughes. “There have been six independent reviews. It has completed formal legal and treaty compliance laws. There is an 80-hour training course for using it. I am truly confident in the technology.”

Despite this, the journey to the battlefield has been far from smooth. In 2007, with the situation in Iraq at its most volatile since the invasion, US forces requested the presence of the ADS. It was never sent. Indeed, The Daily Telegraph has learnt that it has now been recalled from Afghanistan, without being fired in anger. A spokesman said that “no decision had been made” as to its future deployment, even though it seems unlikely that the Pentagon would have shipped a new weapon to an active war zone if it didn’t mean to use it at some point.

What are the problems? Well, Dr Jürgen Altmann, an expert in non-lethal weapons from the University of Dortmund, has observed that although the Army’s test subjects were permitted 15-second intervals between exposure, this might not be the case in real life. The ADS, he says, “provides the technical possibility to produce burns of second and third degree. If incurred over more than 20 per cent of the body, these are potentially life-threatening, and require intensive care in a specialised unit. Without a technical device that reliably prevents re-triggering on the same subject, the ADS has a potential to produce permanent injury or death.”

Other problems come from the limitations of the device itself. Rain, snow and fog hamper its effectiveness, and it can be blocked by highly reflective materials such as aluminium foil. In many situations – particularly in busy crowds – working out the right range will be complicated, and there is also the possibility of targets finding themselves unable to move out of the path of the beam. Hughes offers an uncertain defence: “The target includes sensors to see the whole beam path. An operator would immediately see if a person was unable to move out of the way.”

Yet even if the ADS falls short, the ongoing pressure to keep the civilian body count to a minimum has made the development of similar weapons a top priority for Western forces. The ADS is only one of a raft of new non-lethal measures the US has been developing, under varying levels of secrecy: others rely on bright lights and loud noises to blind or disorientate, or use radio waves to disrupt car engines.

It is difficult to draw conclusions until such weapons are used in combat, especially given the psychological effect they would have on those already suspicious of Western forces. But people who have seen the ADS in use seem to be reservedly enthusiastic. “It’s extremely intimidating,” says Sherwell. “It makes no sound, and you can’t see anything. But if it’s used according to correct procedures, and if it doesn’t do lasting harm, and if there are no burns or blisters – if all those ifs are correct, then it seems a great idea to me.”