The Pentagon plans to buy ten Russian military helicopters for Afghanistan’s fledgling air force at a cost of $180 million (£119 million), ignoring protests from Congressmen who say US aircraft should be considered. 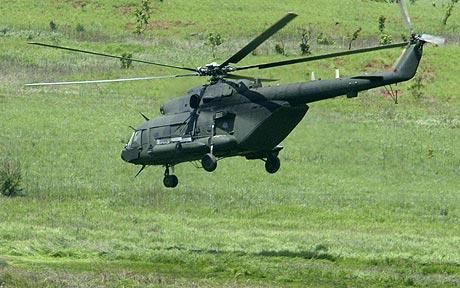 Considered an easy-to-maintain workhorse, the M-17 is comparatively simple to fly and is well suited to Afghanistan’s high altitudes and desert landscapes Photo: GETTY

Defence Department officials have argued that purchasing the M-17s would accelerate the handover of control to Afghan forces.

Most Afghan pilots are in their 40s or older and have flown nothing else. Most of the 92 currently qualified pilots are products of the Soviet flying school.

Teaching them to use US helicopters such as the Chinook or Black Hawk would add as much as two years to making the Afghan National Army Air Corps self-reliant, according to the US military officials.

Considered an easy-to-maintain workhorse, the M-17 is comparatively simple to fly and is well suited to Afghanistan’s high altitudes and desert landscapes.

The US has already spent $648 million on 31 civilian M-17s which it customised for military use in Afghanistan, primarily to transport troops and equipment.

But after Barack Obama’s administration lifted the ban on Rosoboronexport, the Russian state arms exporter, it can now buy aircraft ready for military use direct from Russia, at a cost of $15 million to $18 million each, about half the price of a Chinook, the standard US transport helicopter.

Sen Richard Shelby of Alabama has led objections in Washington, arguing that the procurement of M-17s had lacked oversight.

“The results have led to massive waste, cost overruns, schedule delays, safety concerns, and major delivery problems,” he said, calling on the administration to consider alternative helicopters for the Afghan mission.

The US military turned its attention to the Afghan air force in 2005, four years after the invasion. It then consisted of a few ageing M-17s, but there are now 19 working Mi-17s, with plans to further increase the fleet and establish a pilot training centre in the western province of Herat.