In a little-known city program that critics say may be unconstitutional, cops join fire and building inspectors as they enter homes without a warrant and then arrest residents if they find anything illegal. 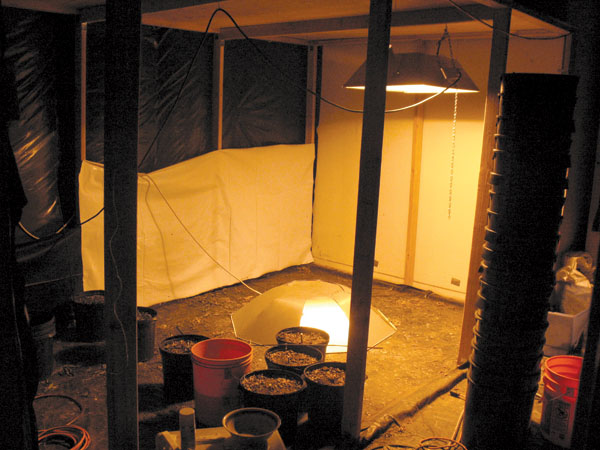 A room at Off-Ramp Studios that officials took to be a marijuana grow room.

On a gloomy recent morning in West Oakland, tenants at the David Gray Building — or, Off-Ramp Studios, as everyone who lives there calls it — stood in the hallways outside their lofts. They gathered around their doors in nervous clusters and spoke in hushed tones, wondering aloud whether they should head to work or stay and observe while two Oakland police officers, two building services code enforcers, a fire inspector, and three property management representatives entered all of their units one by one.

Traditionally the entire procedure would have required a search warrant. But on this day, the group of cops and city officials were operating under a little-known Oakland city program, called “SMART” — Specialized Multi-Agency Response Team — that some legal experts say may be unconstitutional. That’s because they enter people’s homes without consent or a warrant.

At the Off-Ramp Studios, they also entered one loft when no one was home. It was Unit 103. They knocked on the locked door and got no response. After about a minute of waiting, the building manager, who was carrying a tray of keys, opened the door, and everyone entered.

Inside were the remnants of a large, multi-level grow operation, including what appeared to be psilocybin mushroom caps and potted marijuana plants that had been sawed off. There also was evidence of methamphetamine production, according to fire inspector Vincent Crudele, who called the unit a potential felony crime scene. The officers hauled away large Ziplock bags filled with evidence seized from the inspection, and Crudele ordered the unit to be completely cleaned out by property management within 48 hours.

A week prior to the search, Crudele showed up at the Off-Ramp for a preliminary check in response to complaints from one tenant about an open party being planned by another tenant, said Frank Flores, director of development for Madison Park, the building’s leasing agent. Crudele said he noticed the smell of marijuana emanating from one particular unit — 103 — and decided then to schedule the SMART inspection for one week later.

For Crudele, having police officers accompany city inspectors during a SMART inspection ensures security in potentially volatile situations. “It’s a safety issue for us,” he said. “We have limited policing capabilities. If part of the populace is doing something illegal — that creates a problem for me. They may not want to cooperate.”

However, Northern California ACLU staff attorney Michael Risher questioned the legality of searching people’s homes without a warrant or consent. He also argued that it’s not all that burdensome to go down to the courthouse, swear-out an affidavit, and get a legitimate search warrant to look for illegal drugs or real safety hazards.

Risher said there are really only three ways for state agents to legally enter a private residence — with consent, with a warrant, or in an emergency. The SMART inspection is a warrantless process. And considering the fact that a week passed between Crudele’s first sniff of the wafting marijuana and the actual inspection, this doesn’t qualify as an emergency either, Risher said.

“Your home is your castle whether you rent a room in downtown Oakland or own a mansion in the hills,” Risher said. “If you live in your apartment, it’s your apartment. The landlord cannot give police access. There are statutory and constitutional problems with that.”

Crudele, however, argued that the point of the search was community safety. “The ultimate goal of a SMART inspection is to bring a building into code for a better quality of living for everyone there,” Crudele said. “It’s not an attempt to impede any civil liberties or control anybody’s life.”

But was this truly a safety and code enforcement inspection or a drug bust in disguise? The answer appears to be a bit of both. After all, in addition to the incriminating drug evidence, the inspection revealed hundreds of extension cords, taped-open fuses, and a jerry-rigged greenhouse with a lot of fans and wood — a veritable fire-bomb waiting to happen, Crudele said. “It’s like having hay bales in a room made out of 100-year-old wood with hot air running through and drying it out,” he added.

But the legal murkiness of the inspections are problematic, Risher said. And from a legal-procedural standpoint, it appears that few within the City of Oakland are aware of what exactly a SMART inspection is and what justifies one. City Attorney’s Office spokesman Alex Katz declined to comment for this story, other than to confirm that the SMART inspections have been happening for years. Of the Off-Ramp search, Oakland Deputy Fire Chief James Williams said, “As far as I know, that’s the first one I’m aware of generated by the fire department.”

A few days prior to the search of the Off-Ramp Studios, Madison Park had taped a letter on the tenants’ doors announcing the event. It said the Oakland Fire Marshall, city building services, and Oakland police had issued a notice of intent to inspect the entire building, each and every unit (in bold lettering), without exception.

Many of Off-Ramp’s residents said it was common knowledge among the tenants and the management that there were marijuana grow operations going on in some units. “We’re a little embarrassed about how far that tenant got,” Flores of Madison Park said.

The residents, however, appeared to be united in their concern about the inspection. “They haven’t made their intentions clear, which is disconcerting,” said Ryan Mock. “Without informing people of their intentions, it comes across as a drug raid or just really bad PR.” Kevin Wansley, who lives across the hall from Mock, agreed. “I don’t have anything to hide,” he said, “but I’m not comfortable with it.”

The residents also expressed irritation with Madison Park and the company’s unwillingness to stand up for tenants or to articulate exactly what the inspection was all about in the initial notice. “We told everyone we were coming in,” Flores responded. “Regardless of what it said on the notice, we were inviting everyone with us. I think everybody was open to us coming in.”

But Unit 103’s tenant certainly was not. During a phone interview, the tenant, who agreed to talk for this story and to allow the Express to publish photos of his unit if he could remain anonymous, said he was upset about the fact that his loft was entered and searched without his consent and that he came home to a demolished unit. He claimed that Madison Park’s crew destroyed roughly $3,000 worth of various concert memorabilia and housewares in the Crudele-ordered remediation process. “It’s insane that any corporation can do this,” he said.

As of late last week, he also was not certain whether he’s being charged with anything or if there’s a warrant out for his arrest.