What gets me still is that five kiwifruit looked more like twelve — but they were on sale, five for a dollar, and still cost me only one dollar.

Kiwifruit, with described mutations matching what you have just seen, were, according to one recipient, being given to the needy at a local food bank in early November 2012; unfortunately all of the evidence was eaten before this came to my attention(tasted “a little bland”).

I have in fact learned where the kiwi were grown: central California.  Specifically, a small farm, approximately between  Fresno and Bakersfield. 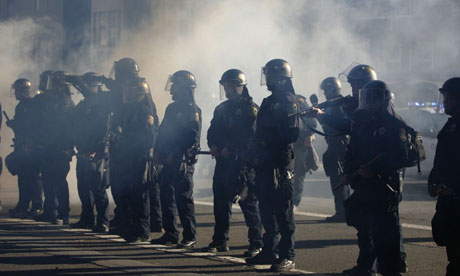 Members of the Oakland Police department form a line during a confrontation with Occupy Oakland demonstrators near the Oakland Museum of California Photograph: Stephen Lam/REUTERS

Police have used teargas and “flash” grenades to break up hundreds of Occupy protesters after some demonstrators started throwing rocks and flares at officers and tearing down fencing.

About 300 people were arrested in the most turbulent day of protests in Oakland since November, when police forcefully dismantled an Occupy encampment.

Oakland Mayor Jean Quan, who faced heavy criticism for the police action last autumn, called on the Occupy movement to “stop using Oakland as its playground.”

Police said the group started assembling at a central plaza on Saturday morning, with demonstrators threatening to take over the vacant Henry Kaiser convention centre. The group then marched through the streets, disrupting traffic.

The crowd grew as the day wore on, with afternoon estimates ranging from about 1,000 to 2,000 people.

The protesters walked to the vacant convention centre, where some started tearing down perimeter fencing and “destroying construction equipment,” according to police.

Why were police so heavy-handed compared to police in other cities dealing with the occupy movement.

– An Open Letter to the Citizens of Oakland from the Oakland Police Officers’ Association:

We represent the 645 police officers who work hard every day to protect the citizens of Oakland. We, too, are the 99% fighting for better working conditions, fair treatment and the ability to provide a living for our children and families. We are severely understaffed with many City beats remaining unprotected by police during the day and evening hours.

As your police officers, we are confused.

Read moreAn Open Letter To The Citizens Of Oakland From The Oakland Police Officers’ Association (Nov. 1, 2011)

Scott Olsen, 24, is able to communicate with his family by writing notes, but his ability to spell has been damaged.

Mr Olsen can understand what’s being communicated to him and doctors said on Friday that he will likely be able to make a full recovery in time.

Scott Olsen, the Iraq war veteran who was seriously injured by a police projectile during a protest in Oakland, has regained consciousness but “cannot talk”.

Olsen, 24, is communicating with friends and family at his bedside by writing notes, but his injury is believed to have damaged the speech centre of his brain, according to Keith Shannon, who served with Olsen in Iraq.

Raw video coverage of the Oakland protest tonight 10/26. He is referring to the night before when protestors and police clashed in Oakland.

– Occupy Oakland – A Message To The Police (Video)

– Occupy Oakland – A Message To The Police (Video)

Footage from the Occupy Oakland protest, October 25th, 2011. After protesters ran to the aid of a badly-injured person, Oakland Police deliberately lobbed a flash grenade into the crowd. Whatever you think of the Occupy movement, police behavior of this kind is criminal and should be prosecuted.