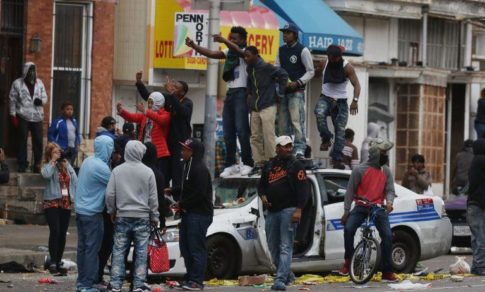 – “All These F**king Excuses”: Baltimore Parents Lash Out In Public Meeting Over Frozen Classrooms

– Children Forced To Freeze, As Baltimore Schools Open With No Heat

Baltimore is on track to exceed 400 homicides in 2017 for the first time in the city’s history and has more than doubled Chicago’s homicide rate on a per capita basis.

“Due to escalating violence reported in Baltimore City, and consultation with law enforcement and Maryland Center for School Safety, we will not be sending any students on field trips to Baltimore City at this time.” 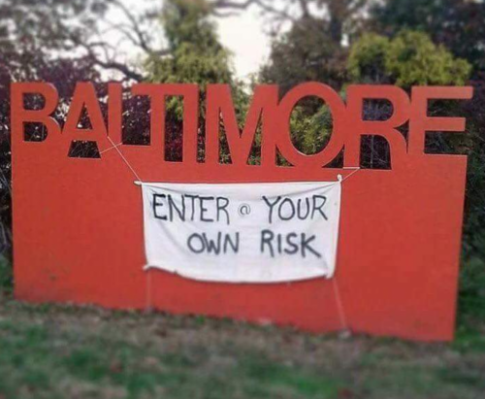 Five days ago, Det. Sean Suiter, a married father of five and an 18-year veteran with the Baltimore Police, was patrolling the streets of West Baltimore around 5pm last Wednesday when he saw suspicious activity. Suiter approached a man and was shot point blank in the head, in a summary execution. He was rushed to the hospital in critical condition where he later died of his injuries.

In response, Baltimore Police reacted with ‘fire and fury’ turning the neighborhood where Suiter was shot into an “open-air prison”, shutting down city streets and enabling checkpoints for citizens while officers in tactical gear went door to door, according to Baltimore Brew. Residents were prohibited from entering their own neighborhood unless they showed proper identification, these extreme measures have been in place for 4-5 days.

Baltimore’s second attempt at a 72-hour ‘cease-fire’ was cut short for the second time this year after an off-duty Washington police officer was killed and a women wounded on Saturday.…

“We have graduated kids who can’t read the diploma…”

“…the first versions were printed on November 11… but 19 days later, on the 30th, the report cards were printed again… This time, every single failing grade was changed to 60… comments meant to alert parents of their child’s poor performance were deleted…”…

Yep, that should fix it…

– Visualizing America’s Wealth Inequality Through an Aerial Experience of Baltimore

– Watch: Cop Accidentally Films Himself Planting Drugs to Frame Someone:

Baltimore — Charges against a Maryland man who has been sitting in jail since January have been dropped after video surfaced of a cop falsifying evidence in the case, it was reported Wednesday. From the Baltimore Sun:

“Baltimore police and prosecutors have launched investigations after being alerted to body camera footage that the public defender’s office says shows an officer planting drugs.

– Baltimore Citizens Urge “Nobody Kill Anybody” Ceasefire At The Start Of August:

In recent months, I’ve toured the worst zip codes America has to offer. The rhyming factor in each zip code is deterioration post ‘American High’ (mid-1960s). This weekend, I’m bringing you a treat from West Baltimore, where the homicide rate is spiraling out of control. In some areas, it’s so bad that mobile police stations in 40 foot RV’s are patrolling the streets. Block after block, it resembles a post-apocalyptic view of America, if industry fails to return. We’ll save this story for later.

– A Random Walk Down Baltimore’s Triangle Of Death

– A Tour Down Homicide Lane, As Baltimore Descends Into Chaos:

The mainstream media dares not to share this with you, because it destroys the gentrification narrative to lure in the millennial generation for city life. Millennials’ are frantically buying real estate <2 miles from this high homicide area. For the sake of the millennials’, let’s hope a spillover in crime does not occur in their neighborhoods.

“I’m calling on all the assistance we can possibly get because I can’t imagine going into our summer months with our crime rate where it is today, what that’s going to look like by the end of the summer.  Murder is out of control.”

– Baltimore Is Begging Feds To Step In To Restore Law And Order:

Baltimore’s mayor asked the FBI to send in reinforcements Wednesday to help the city get its murders under control.

Mayor Catherine Pugh, speaking at a news conference, explained she went to the FBI’s Baltimore office for extra agents to join with police officers in combating a skyrocketing murder count, reports CNN.

“Murder is out of control. There are too many guns on the streets. We’re looking for all the help we can get,” Pugh said.

–  This is What Happens if You Defy Curfew – A Shocking 90 Second Video from the Streets of Baltimore (Liberty Blitzkrieg, May 4, 2015):

On Saturday night, a man whose name still seems to be unknown, but who was wearing a “F##k the Police” t-shirt, came out in front of police past the official curfew. This is what happened next:

As Mike noted previously, the situation in Baltimore is very serious and all Americans should be paying very close attention; but Baltimore is just a Microcosm of America.

Baltimore, Maryland is in many ways the perfect microcosm for these United States of America. If you still don’t get that, you’ll be in for a rude awakening in the years ahead.

A gradual erosion of the Constitution and the civil rights of the citizenry, the abuse of power by people in authority, perverse financial incentives that lead to horrible outcomes, zero accountability, and a ubiquitous surveillance state apparatus; Baltimore has it all. Yet all of these troubling traits have also come to characterize early 21st century America.

Read moreThis is What Happens if You Defy Curfew: A Shocking 90 Second Video from the Streets of Baltimore