Standard Chartered has told clients to prepare for a fall in property prices of up to 30pc in Beijing, Shanghai, Shenzen, and other large cities in China as the delayed effects of monetary tightening begin to bite. 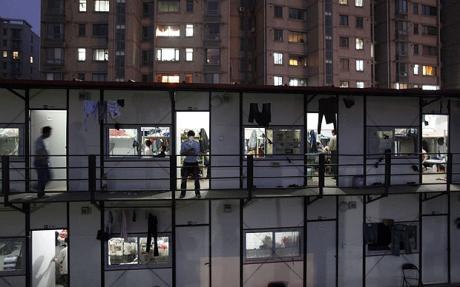 Migrant workers from outside China’s major cities have flooded to fill jobs created by the construction boom. Here a worker in Shanghai steps outside his temporary accommodation to check his phone.

Stephen Green, the bank’s China economist, said a glut of newly built homes were hitting the market just as buyers are restrained by higher down-payments and curbs on speculation. “We believe developers will be forced to cut prices,” he said.

Kenneth Rogoff, ex-chief economist for the IMF, told Bloomberg Television in Hong Kong that the denouement could prove abrupt after such a torrid boom. “You’re starting to see that collapse in property and it’s going to hit the banking system,” he said.

The government is trying to deflate the housing market gently, mostly using tools known as “financial repression” rather than Western style rate rises. Xu Shaoshi, land minister, said sales are already dropping. “In another quarter’s time or so, the property market will probably come to a full correction and prices will fall. It’s hard to say to what extent they will fall,” he said.

At the same time, China is shifting its foreign reserve strategy, rotating out of Europe and into Japanese government bonds (JGBs). Japan’s finance ministry said China bought $6bn (£3.9bn) of bonds from January to April, a record pace of accumulation.

Analysts say Beijing is hunting for fresh places to park its reserves after losing confidence in eurozone debt. It already holds around 70pc in dollars, a level deemed too high by many in Beijing. China’s move helps explain the fall in yields on 10-year JGBs to just 1.06 pc last week, and why the yen has appreciated to ¥87 to the dollar — nearing levels last seen in 1995.

China views soaring house prices as a threat to social stability, since workers are shut out of the market. The price-to-earnings ratio is 13 in Beijing and Shanghai, four times Western levels.

Charles Dumas from Lombard Street Research said China’s boom had been driven by its fiscal stimulus of 13pc of GDP, the largest ever by major country in such a short period. The boost was concentrated in 2009, with credit growth running at 25pc of GDP.

“The Chinese had nowhere to put their savings since real interest rates were negative and capital controls stopped them investing abroad, so they bought apartments,” he said.

Wealthier families often hold three, four, or more properties as a hard asset to store wealth, leaving many vacant. This has disguised the scale of excess inventory. It is unclear what will happen if there is the same sort of investor flight seen already on the Shanghai bourse, which is down 55pc from its peak.