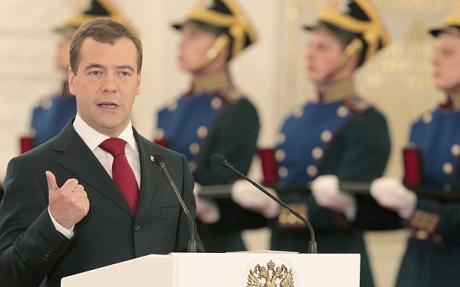 June 19 (Bloomberg) — Russia wants the ruble to be one of the world’s reserve currencies as President Dmitry Medvedev renews his push to reduce the dollar’s dominance and make Moscow a global financial hub.

“Only three, five years ago it seemed like a fantasy” to create a new reserve currency, Medvedev said yesterday in a speech in St. Petersburg, Russia. “Now we are seriously discussing it.”

Medvedev, who has repeatedly called for a supranational currency to match the dollar, said discussions with China are continuing on broadening the global options. Russia sold U.S. Treasuries for a fifth consecutive month in April, the U.S. Treasury Department said June 15. The world may need as many as six reserve currencies, Medvedev said.

“It’s something that’s obviously needed,” he said at the St. Petersburg International Economic Forum. “Developing a financial center in Moscow will considerably help to strengthen the ruble’s position as one of the reserve currencies.”

If a country wants to alter the world economic order, including the number of reserve currencies, it must become an international financial center, Bank of Israel Governor Stanley Fischer said in an interview yesterday.

“For a currency to be a reserve currency, you have to have capital markets in which you can sell it and buy it very easily,” Fischer said. “New reserve currencies don’t emerge by fiat. They emerge as countries change.”

Medvedev said he envisages a new economic hierarchy allowing emerging-market giants such as Russia and China to drive the global agenda as the world emerges from the first global recession since the 1930s.

“We really live at a unique time, and we should use it to build a modern, prosperous and strong Russia, a Russia that will be a co-founder of the new world economic order,” he said.

Russia may add the Australian and Canadian dollars to its international reserves as the central bank diversifies the world’s third-largest stockpile away from the greenback, central bank First Deputy Chairman Alexei Ulyukayev said in a June 16 interview.

Though Russia is “very carefully monitoring what’s happening in the euro zone,” the emergence of the euro as a currency to rival the dollar’s dominance helped soften the impact of the global crisis, Medvedev said.

“If the world depended completely on the dollar, the situation would have been more difficult,” Medvedev said.