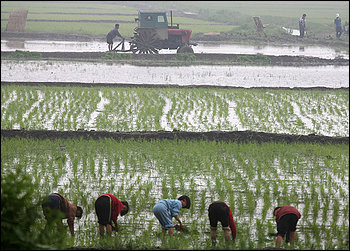 North Koreans work on a farm near the Yalu River. A dire food shortage has led the government to lift all restrictions on private markets. (Reuters)

SEOUL — Bowing to reality, the North Korean government has lifted all restrictions on private markets — a last-resort option for a leadership desperate to prevent its people from starving.

In recent weeks, according to North Korea observers and defector groups with sources in the country, Kim Jong Il’s government admitted its inability to solve the current food shortage and encouraged its people to rely on private markets for the purchase of goods. Though the policy reversal will not alter daily patterns — North Koreans have depended on such markets for more than 15 years — the latest order from Pyongyang abandons a key pillar of a central, planned economy.

With November’s currency revaluation, Kim wiped out his citizens’ personal savings and struck a blow against the private food distribution system sustaining his country. The latest policy switch, though, stands as an acknowledgment that the currency move was a failure and that only capitalist-style trading can prevent widespread famine.

“The North Korean government has tried all possible ways [for a planned economy] and failed, and it now has to resort to the last option,” said Koh Yu-hwan, professor of North Korean studies at Dongguk University in Seoul. “There’s been lots of back and forth in what the government has been willing to tolerate, and I cannot rule out the possibility of them trying to bring back restrictions on the markets. But it is hard for the government to reverse it now.”

Because North Korea operates in secrecy and isolation, outside observers rely on informants and accounts from defectors. In this case, experts agree that the food shortage is dire. Several analysts who monitor and travel to North Korea said that in recent weeks, Pyongyang has abandoned almost all its rules about who can spend money and when. That would seem to indicate that Kim — who once equated free-market trading with “egotism” and a collapse of social order — now wants to rehabilitate the markets damaged in November.

As of May 26, the government no longer forces markets to close at 6 or 7 p.m., has dropped the rule restricting customers to women older than 40 and has lifted a ban on certain goods being sold. An official in the city of Pyungsung informed the Good Friends humanitarian group that the living standard had “drastically decreased since the currency exchange, and the government cannot provide distribution so they have to bring the market back up.”

The Good Friends newsletter quoted the official as saying: “There are increasing deaths from starvation so opening [the] market is a reasonable resolution. Death due to starvation has gone out of control.”

In the mid-1990s, amid a total collapse of the central planned economy, somewhere between 3 and 5 percent of the population — perhaps 1 million people — died of starvation. Meanwhile, North Koreans increasingly turned to small markets for trading and buying supplies.

In part because of that, the hermit nation now maintains a stronger line of defense against starvation — one that did not exist during the famine.

Compared with the peak of the food crisis, in the mid and late ’90s, “the actual amount of food — less is available now,” said Kim Heung-gwang, a North Korean defector and president of a group called North Korea Intellectuals Solidarity. “But back then, the food circulation industry wasn’t as built up. Even though the absolute amount of food is less now than it was 15 years ago, I think the starvation problem will be less significant.”

In 1994, Kim said, people “didn’t know how to survive because they were looking for rations.”

North Korea analysts say that the Nov. 30, 2009, currency reform caused nearly as much trauma as the famine 15 years earlier. The government turned 100 won into 1, and North Koreans responded with minor protests.

In recent months, North Korea’s chronic food problems have probably worsened. When South Korea’s government concluded in late May that the North was responsible for sinking one of the South’s warships, killing 46 people, international outrage caused food aid to slow. The South announced that it would cut all trade with its neighbor, though the North has denied any responsibility. China remains North Korea’s primary benefactor, but little is known about how much food China supplies. According to analysts, Pyongyang’s latest reaction could suggest it is struggling to secure the necessary aid from China.