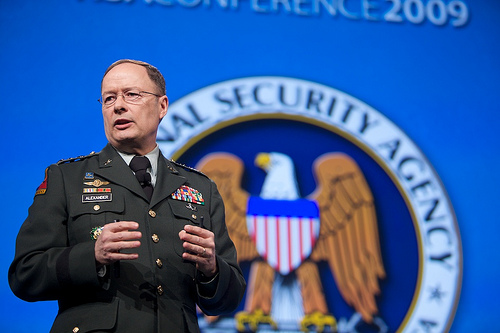 The top US cyberwarrior said Thursday that Pentagon networks are probed over six million times a day and expressed concern about a rise in “remote sabotage” attacks on computer systems.

General Keith Alexander, head of the newly created US Cyber Command, also said developing a real-time picture of threats to US military networks and the rules to fight back would be among his priorities.

In his first public remarks since assuming command of Cyber Command two weeks ago, Alexander said the US military “depends on its networks for command and control, communications, intelligence, operations and logistics.”

“We at the Department of Defense have more than seven million machines to protect linked-in 15,000 networks,” he said in a speech to cybersecurity experts and reporters at the Center for Strategic and International Studies.

The role of US Cyber Command is to “deter, detect and defend against emerging threats against our nation in cyberspace,” Alexander said.

“Our nation’s interests are in jeopardy,” he said citing “tremendous vulnerabilities” and threats from a “growing array of foreign actors, terrorists, criminal groups and individual hackers.”

“Cyberspace has become a critical enabler for all elements of national and military power,” Alexander said. “Our data must be protected.”

The four-star general said distributed denial of service (DDOS) attacks on Estonia and Georgia in 2007 and 2008 were aimed at temporarily shutting down computer networks but new threats have emerged.

“There are hints that some penetrations are targeting systems for remote sabotage,” he said. “The potential for sabotage and destruction is now possible and something we must treat very seriously.”

Alexander said the military and government needed to increase their ability it see what is happening on computer networks in real-time.

“We have no situational awareness, it’s very limited. We do not have a common operating picture for our networks,” he said.

“We need real-time situational awareness on our network to see where something bad is happening and take action there at that time,” he said. “We must share indications and warning threat data at net speed.”

Alexander said more “clear rules of engagement” needed to be established over how to respond to cyberattacks.

A Russian proposal to create a cyberwarfare arms limitation treaty could be “a starting point for international debate” but “at levels above me,” he said.

Alexander said effective cybersecurity would involve partnering with the private sector and others.

“All of us in government recognize that we cannot do this without the help of industry, academia and our allies,” he said. “Securing cyberspace is a team sport.

“Securing our networks is not just a (military) issue it is a national security issue with implications for all instruments of national power,” he said.

Alexander said the NSA, whose warrantless wiretapping program has been ruled illegal by a US judge, takes civil liberties and privacy “very seriously” and is subject to strict oversight by Congress and the courts.

“My responsibility as director of NSA is to ensure that what we do comports with the law,” he said. “Every action that we take we have legal reviews of it all the way up or down.

“It doesn’t mean we won’t make a mistake,” he said.

“The hard part is we can’t go out and tell everybody exactly what we do because we give up capability that may be extremely useful in protecting our country and our allies,” he said.