Is this how the elite wants to bring to life their ‘Barbarossa 3’ plans to start WWIII? 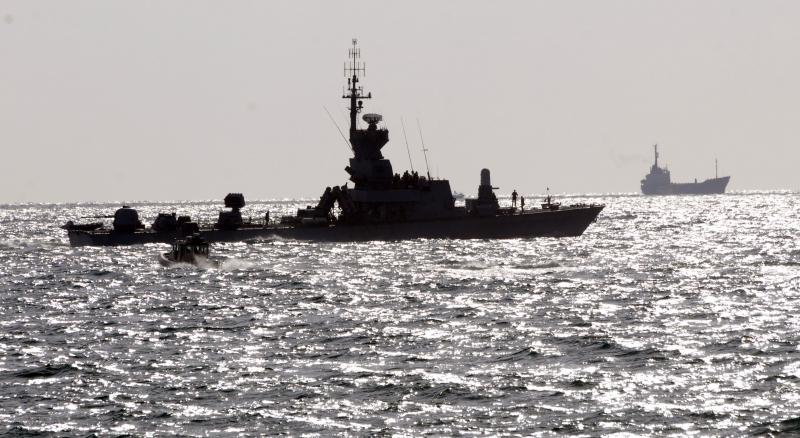 An Israeli naval ship, foreground, drives near the seized Rachel Corrie aid ship at the Ashdod military port in southern Israel, June 5, 2010. The 1,200 tonne aid vessel was prevented by the Israeli navy from reaching Gaza to deliver aid and supplies. (UPI)

Iran is ready to provide escort for further aid ships destined to Gaza. The pledge made by Iranian supreme leader Ayatollah Ali Khamenei threatens to escalate tensions with Israel.

Iran’s Revolutionary Guard members are at call to escort further Gaza-bound aid ships, Ayatollah Ali Khamenei was quoted as of saying by Reuters.

“If the Supreme Leader issues an order for this, then the Revolutionary Guard naval forces will do their best to secure the ships,” Shirazi said. “It is Iran’s duty to defend the innocent people of Gaza.”

This follows the recent incident in which Israel’s navy boarded the humanitarian aid ship “Rachel Corrie”, sailing under an Irish flag, and towed it to the port city of Ashdod.

Turkey has called on Israel to accept an international probe into last week’s deadly raid on the aid ship, carrying pro-Palestinian activists on board. Nine people, all Turkish citizens, were killed during the Israeli attack on the ship.

In the light of recent developments, Ankara is threatening to reconsider its ties with Israel. Analysts say the alliance between the two countries has hit an all-time low and is unlikely ever to recover.

Meanwhile, France said the European Union is ready to check the cargo on any vessels bound for Gaza in order to make sure humanitarian deliveries arrive safely.

That proposal comes as Israel rejected the idea of an UN-backed probe into last week’s killings on board the aid flotilla heading for the blockaded territory.

UN Secretary General Ban Ki-moon and French President Nikolas Sarkozy are among those putting pressure on Israel to explain what happened. But Israel says it has the right to launch an internal investigation.

Ada Ravon, a member of the Israeli human rights organization “Machsom Watch”, says Israel’s actions are a sign of arrogance.

“It was the most stupid decision I have ever come across on the political arena in Israel. We have worked against every law in international law that I can think of – we have committed crimes against civilian populations, we have acted as if we were the lords and masters of the world and I think, its wrong, it creates hatred and it does not control the arms to Gaza, and who says we have the right to control entrance of the arms to Gaza?” Ada Ravon told RT.

Meanwhile, the Israeli Defense Force claims it has “thwarted a rare maritime terror attack” by an armed group of Palestinians, Haaretz.com reports.

The Israeli navy opened fire on a boat with five Palestinians on board. All were wearing diving suits and had diving gear onboard. The men were on their way to attack Israeli targets, the IDF said.

Palestinian health official Moawiya Hassanain said four bodies have been retrieved by a rescue team. Two of the dead had multiple gunshots to the head.

The Al-Aqsa Martyrs Brigade – an offshoot of the Fatah party, led by Palestinian President Mahmoud Abbas – said the killed were its marine unit members and were training.