And Tony Hayward knows what he is talking about:

…there are several reasons to believe that things are much worse than we’ve been told:

Oh, wait a minute. What will happen if all that METHANE that comes with the oil ‘spill’ explodes? 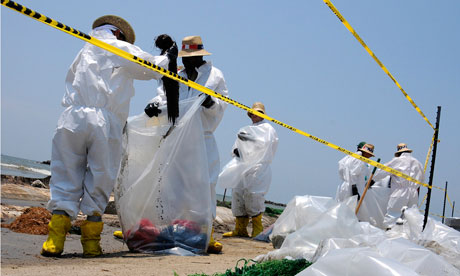 A used oil boom part is disposed of in Louisiana. (Reuters)

BP has challenged widespread scientific claims that vast plumes of oil are spreading underwater from its blown-out rig in the Gulf of Mexico. The denial comes as the oil giant prepares for a new operation to put an end to the worst oil spill in US history – which could see the leak get worse before it gets better.

The company’s challenge to several scientific studies is likely to put it further at odds with an increasingly angry Obama administration, which has accused it of playing down the size of the leak in an effort to limit possible fines.

BP’s chief executive, Tony Hayward, said it had no evidence of underwater oil clouds. “The oil is on the surface,” he said. “Oil has a specific gravity that’s about half that of water. It wants to get to the surface because of the difference in specific gravity.”

Hayward’s assertion flies in the face of studies by scientists at universities in Florida, Georgia and Mississippi, among other institutions, who say they have detected huge underwater plumes of oil, including one 120 metres (400ft) deep about 50 miles from the destroyed rig.

BP’s claim is likely only to further anger environmentalists and the White House, which has grown increasingly suspicious of the company’s claims to be frank and transparent on developments. The president’s environmental adviser and director of the Office of Energy and Climate Change Policy, Carol Browner, has accused BP of misstating the scale of the leak.

“BP has a vested financial interest in downplaying the size of this,” she said on CBS television. “They will pay penalties at the end of the day, a per-barrel per-day penalty.”

Ed Markey, chairman of the House of Representatives environment committee, has also accused BP of underplaying the scale of the disaster and suggested that it may have a criminal liability.

“The fine that can be imposed upon them is based on how many barrels [pour in to the sea]. It could wind up in billions of dollars of fines,” said Markey. “They had a stake in low-balling the number right from the beginning. They were either lying or they were incompetent.”

In the White House, under increasing criticism for not taking charge of the effort to stop the spill, some officials are saying they have been misled by the company or kept in the dark at key moments.

The Politico website reported that the Obama team was incensed that the company failed to inform it for a day and a half after suspending the failed “top kill” operation to plug the spill using rubber tyres and mud.

Obama is expected to hold his first meeting today with the leaders of an oil spill commission he established to make policy recommendations about US offshore oil drilling. The commission will be similar to those that looked into the explosion of the space shuttle Challenger in 1986 and the Three Mile Island nuclear accident in 1979.

Also today, US attorney general Eric Holder will meet federal prosecutors and state attorneys general in New Orleans. It will be Holder’s first trip to survey the damage before what legal experts believe will be a criminal investigation into the disaster.

The dispute between the administration and BP comes as the company readies its latest effort to contain the flow of oil in to the sea, following the failure of top kill. The new plan involves an intricate operation to cut the top off the damaged riser that brought oil to the surface of the destroyed rig. The intention is to create a flat surface to which to attach a valve that would divert the oil into a pipe and on to a ship.

But slicing the top off the damaged pipe may result in oil flowing into the sea at a faster rate until the new valve is fitted. Even if successful, the operation would only limit, not entirely stop, oil from flowing into the sea. If this measure failed, BP’s best hope of halting the oil would remain the drilling of a relief well that would ease the pressure on the damaged one. But the US government has warned that the spill could continue into August.

The attempts to stop the oil flow have been given added urgency by the start of the hurricane season tomorrow.

Forecasters are predicting an unusually high number of storms over the next six months. If the oil is still spread across the sea, a hurricane is likely to disperse it over a much wider area and push it deeper into marshlands and other inland areas, making the environmental disaster even worse.

The National Oceanic and Atmospheric Administration is predicting between eight and 14 hurricanes this season, with perhaps a similar number of smaller storms.

The US military has ruled out taking charge of the operation to stem the flow of oil from the blown-out BP rig. The chairman of the joint chiefs of staff, Admiral Mike Mullen, today said that military chiefs had looked at the available equipment and concluded that “the best technology in the world, with respect to that, exists in the oil industry”.

A day earlier, the former US secretary of state, Colin Powell, said the military should step in because the crisis was now “beyond the capacity” of BP to stop.