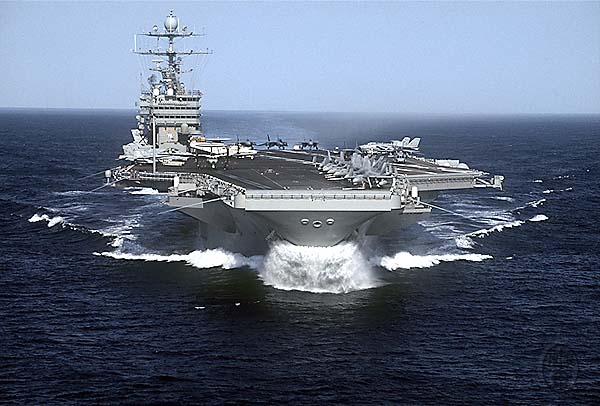 As if uncontrollable economic contagion was not enough for the administration, Obama is now willing to add geopolitical risk to the current extremely precarious economic and financial situation.

Over at Debkafile we read that the president has decided to “boost US military strength in the Mediterranean and Persian Gulf regions in the short term with an extra air and naval strike forces and 6,000 Marine and sea combatants.”

Carrier Strike Group 10, headed by the USS Harry S. Truman aircraft carrier, sails out of the US Navy base at Norfolk, Virginia Friday, May 21. On arrival, it will raise the number of US carriers off Iranian shores to two. Up until now, President Barack Obama kept just one aircraft carrier stationed off the coast of Iran, the USS Dwight D. Eisenhower in the Arabian Sea, in pursuit of his policy of diplomatic engagement with Tehran.

For the first time, too, the US force opposite Iran will be joined by a German warship, the frigate FGS Hessen, operating under American command.

It is also the first time that Obama, since taking office 14 months ago, is sending military reinforcements to the Persian Gulf. Our military sources have learned that the USS Truman is just the first element of the new buildup of US resources around Iran. It will take place over the next three months, reaching peak level in late July and early August. By then, the Pentagon plans to have at least 4 or 5 US aircraft carriers visible from Iranian shores.

Another four US warships will be making their way to the region to join the USS Truman and its Strike Group. They are the guided-missile cruiser USS Normandy and guided missile destroyers USS Winston S. Churchill, USS Oscar Austin and USS Ross.

We can’t wait for Iran to feel completely unthreatened by this escalation and to decide to take no action whatsoever as the Nobelists push it even more into a corner from which the only escape, to a rational player, would be outright aggression… Which begs the question just how an irrational player would react.

1 thought on “US Begins Massive Military Build Up Around Iran, Sending Up To 4 New Carrier Groups In Region”