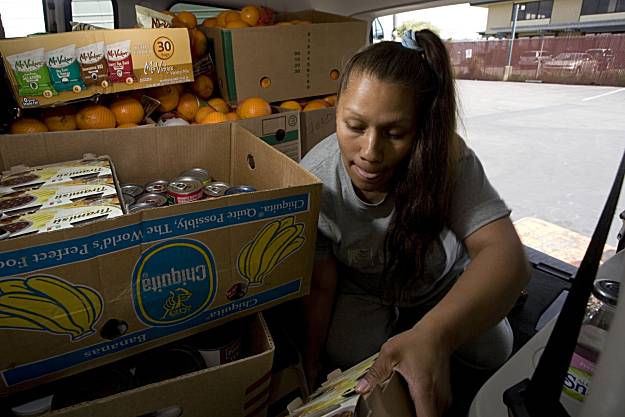 Sherri Martinez packs food given to the Alameda County Community Food Bank to be distributed in Hayward.

Farmers, restaurants and supermarkets throw away millions of tons of edible food each year at a time when a growing number of Californians struggle to put food on the table.

More than 6 million tons of food products are dumped annually, enough to fill the Staples Center in Los Angeles 35 times over, state studies have found. Food is the largest single source of waste in California, making up 15.5 percent of the state’s waste stream, according to the California Integrated Waste Management Board.

An examination by California Watch and the Annenberg School for Communication and Journalism at the University of Southern California found shortcomings along California’s food distribution chain that allow vast amounts of food to go to waste in landfills, despite incentives that encourage food donations.

— Millions of tons of fruit and vegetables rot in fields and orchards or are plowed over each year. Some of these edible crops are left behind because they are misshapen or discolored. Gleaning programs rescue only a small portion of the field waste.

— Major retail grocery chains are more likely to throw away fruits, vegetables and even entire hams and roasts than donate to distribution centers. While federal and state laws protect grocers from liability, many stores were concerned that donated food could sicken recipients even if it had not reached its expiration date. While some major chains donate food, others do not.

— Restaurants dump tens of thousands of tons of edible food every year. The vast majority of the state’s 90,000 restaurants do not participate in food-donation programs.

Waste is not just an issue for corporate chains and mom-and-pop food outlets. Discarded food represents a quarter of all waste tossed away by California households. While some waste is inevitable in all forms of business, the commodity of food takes on added significance, experts say.

“Waste is built into the food chain at all levels,” said Jonathan Bloom, author of an upcoming book on food waste and of the blog Wasted Food. “The amount of food we waste is ridiculous, especially when you consider the number of Americans who experience hunger every day.”

Several volunteer organizations work to “reharvest” California’s vast produce landscape and divert edible food that would be wasted from grocery stores and restaurants into California’s food banks and soup kitchens.

“It’s a win-win situation,” said Arlene Mercer, founder of Food Finders, a food recovery group in Long Beach that collects donations from supermarkets and restaurants for food pantries. “They can receive a tax write-off, people will be fed, and it will stop food waste.”

But Mercer and others say too many opportunities are missed to divert food to the hungry before it is thrown away.
Produce left in fields

California’s carpet of farmland spans 25 million acres and produces about half of the nation’s fruits, nuts and vegetables, according to the California Department of Food and Agriculture.

“Waste is inevitable,” said Mike O’Leary of Boskovich Farms in Ventura County. “We try to minimize it, but sometimes fields have to be disked,” or cultivated, resulting in food being plowed under.

Some farms, such as Del Monte Foods Co.’s, try to cut their waste by donating produce to food banks. The California Association of Food Banks, which represents 45 food banks, has distributed more than 60 million pounds of food through its Farm to Family gleaning program.

But such efforts are only moderately successful. During one recent gleaning operation, about 10 percent of an estimated 140,000 pounds of carrots left above ground was rescued, according to Christy Porter, founder of Hidden Harvest, based in Coachella (Riverside County).

“We’re not in the business of leaving commodities in the field,” said Scott Deardorff of Deardorff Family Farms in Ventura County. He estimated that food left in the fields is closer to 5 percent.
Grocers fear liability

Some grocers are reluctant to donate much of the food left over because of liability concerns.

John Wadginski, 24, saw this firsthand. While in college, Wadginski worked at a Safeway store deli in Davis. The amount of food he tossed into the trash every night still bothers him.

Wadginski asked his supervisors if he could volunteer to take the food to a local shelter, but he said he was told not to that “because if anything happened, they would be liable.”

A 1996 federal law protects all donations made in good faith. States have similar statutes. The only exceptions are gross negligence or intentional misconduct. A plaintiff would have to prove that a company or individual intentionally tried to harm another person by making a donation of food it knew to be unsafe.

Most grocery chains participate in some sort of hunger-relief program. But chains often limit donations to bakery items – the kind of foods that hunger organizations need the least. Other stores hesitate or refuse to donate perishable items such as produce and meat.

Safeway and Vons spokeswoman Teena Massingill acknowledged concerns about liability as a reason meats and other spoilable items aren’t donated.

Costco sends about 45 million pounds of food each year to compost, its own records show. The chain has no companywide food recovery program. Mercer of Food Finders said that she has approached Costco but that the company has chosen not to participate, instead offering her discounts on food she buys for the programs and occasional free turkeys.

Albertson’s Inc. was the first food chain to start a formal perishable-food-recovery program. In the Fresh Rescue program, stores within the Albertson’s chain can partner with an organization in their community to receive food from the supermarket. Each store has one or two employees trained and designated to work with partner agencies.

More than 90,000 eating and drinking establishments operate in California, according to the California Restaurant Association. But fewer than 1,000 restaurants donated last year through Food Donation Connection, the largest program that links food service donors with hunger-relief agencies.

Kevin Westlye, executive director of the Golden Gate Restaurant Association, which represents 800 firms in the Bay Area, said most members of his association participate in Food Runners, a 23-year-old San Francisco organization that feeds the hungry with food that would be otherwise discarded.

To read more about food waste in California and to view a video on donations, go to www.californiawatch.org.

This story is the result of a collaboration between USC’s Annenberg School for Communication and Journalism and California Watch, a project of the Center for Investigative Reporting. The reporters are graduate students at USC Annenberg. Chronicle staff writer Joe Garofoli contributed to this report.