And nothing will happen, unless the elite wants it to happen. 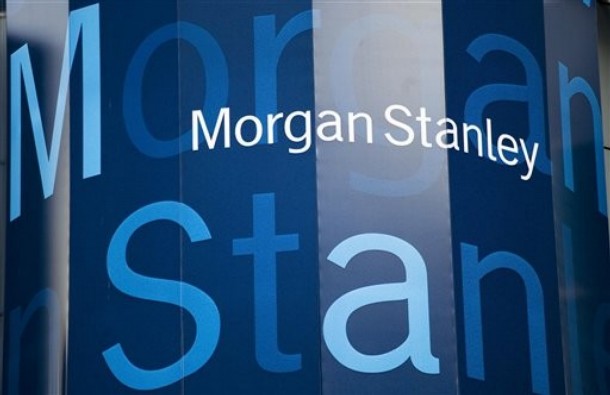 U.S. prosecutors are investigating whether Morgan Stanley misled investors about mortgage-derivatives deals it helped design and sometimes bet against, people familiar with the matter said, in a step that intensifies Washington’s scrutiny of Wall Street in the wake of the financial crisis.

Morgan Stanley arranged and marketed to investors pools of bond-related investments called collateralized-debt obligations, or CDOs, and its trading desk at times placed bets that their value would fall, traders said. Investigators are examining, among other things, whether Morgan Stanley made proper representations about its roles.

Among the deals that have been scrutinized are two named after U.S. Presidents James Buchanan and Andrew Jackson, a person familiar with the matter said. Morgan Stanley helped design the deals and bet against them but didn’t market them to clients. Traders called them the “Dead Presidents” deals.

The probe is at a preliminary stage. Bringing criminal cases involving complex Wall Street deals is a huge challenge for prosecutors. The government must prove beyond a reasonable doubt that a firm or its employees knowingly misled investors, a high bar. The government launches many criminal investigations that end without any charges being filed.

Morgan Stanley wasn’t among the biggest players in the CDO market. Although the firm made money on the Dead President deals, any profit was overshadowed by the $9 billion the firm lost on bullish mortgage bets in 2007, a person familiar with the matter said.

The investigation grew out of an ongoing civil-fraud investigation launched by the Securities and Exchange Commission in 2009, examining the mortgage-bond business of more than a dozen Wall Street firms, the people said. The Manhattan U.S. Attorney’s office now is investigating some of those firms’ activities in a criminal probe.

“We’ve not been contacted by the Justice Department about any transactions that were raised in The Wall Street Journal article and we have no knowledge whatsoever of a Justice Department investigation,” Morgan Stanley Chief Executive James Gorman said during a news conference in Tokyo on Wednesday.

Mr. Gorman said Morgan Stanley has looked into the “Dead Presidents” deals itself and has “no reason to believe that there is any substance behind any supposed investigation.”

Spokespeople for the Manhattan U.S. Attorney’s office and the SEC declined to comment.

But William Blair analyst Mark Lane said the probe shouldn’t be a surprise to investors.

“Every investment bank has been receiving subpoenas about CDOs and the marketing of CDOs,” Mr. Lane said. “They’ve been exchanging information with regulators as they look at how products are being marketed in this area, related in particular to the residential housing market.”

Mr. Lane said that the investigations will likely have some influence on financial-services reform and that the damage to any individual firm’s reputation is much less now given that the probes are much broader.

“Investment banks and what they do and the liquidity they bring and their ability to raise capital are fundamental to the way capital markets work,” he said. “Business is not going to go away, and if everyone is being scrutinized, it dampens the potential negative impact on any one firm.”

Mr. Lane said the news is likely good for Goldman Sachs Group Inc. “to see some other companies in the headlines as well so that people understand they’re not the only firm that is being scrutinized in this.”

The Wall Street Journal previously reported that federal prosecutors also are investigating whether Goldman or its employees committed securities fraud in connection with its mortgage trading. Goldman declined to comment on the criminal probe.

Last month, the SEC filed a civil suit against Goldman in a New York federal court, alleging the firm and one of its mortgage traders created a product secretly designed to fail for the benefit of a hedge-fund client, without disclosing the hedge fund’s role in picking investments for the 2007 deal, called Abacus.

Goldman has vigorously denied the allegations of the civil case but recently began settlement talks with the government, according to people familiar with the matter.

In both the Goldman and Morgan Stanley deals, investigators are examining whether there were proper representations made to investors.

Among the Morgan Stanley deals that have been scrutinized are the Jackson and Buchanan CDOs, created in mid-2006. Those deals essentially were portfolios of derivatives that aped the performance of dozens of residential and commercial mortgage-backed securities. Morgan Stanley helped to create the deals, which each issued about $200 million in bonds. Citigroup Inc. underwrote and marketed the Jackson deal to investors, while UBS AG did the same for the Buchanan deal.

A Citigroup spokesman said the bank wouldn’t comment on this specific transaction. It earlier disclosed that it is cooperating with inquiries from the SEC and other regulatory agencies about its activities in the subprime-mortgage market.

A UBS spokeswoman declined to comment. In its quarterly financial update this month, UBS said it is “responding to a number of governmental inquiries and investigations” related to mortgage securities.

One feature of the Morgan Stanley deals was a structure that could increase the magnitude of the bullish investors’ exposures to the underlying mortgage bonds. This feature, which was disclosed in some offering documents, made it more likely that such investors could lose money if the underlying bonds performed poorly.

Morgan Stanley traders took the more profitable, bearish side of these transactions, according to traders. These positions weren’t disclosed in some deals. It couldn’t be determined how much money Morgan Stanley made with these wagers.

The SEC’s industry-wide civil investigation into Wall Street activities in selling CDOs began in 2009. Beginning earlier this year, prosecutors from the Manhattan U.S. attorney’s office began showing up to meetings arranged by SEC investigators who were questioning individuals about their firms’ practices, people familiar with the matter said.

There have been several rounds of SEC subpoenas issued in the probe, a person familiar with the matter said.

Last summer, the SEC asked Wall Street firms about any of their clients that were betting against CDOs, the person says. In the fall, Morgan Stanley provided offering documents to the SEC about CDOs, including its Dead Presidents deals. Morgan Stanley and other firms received a subpoena in December 2009 asking about its sale and marketing of CDOs, people familiar with the matter said.

In the past six weeks, a fresh round of SEC subpoenas have asked a smaller number of Wall Street firms for a broad range of information on CDO deals, including prospectuses, offering documents and other data that would include disclosure statements.

On an April 21, 2010, conference call with investors and analysts, Morgan Stanley Chief Financial Officer Ruth Porat responded to an analyst question, saying “we have not received a Wells notice in connection with our CDO business.” Wells notices inform firms or individuals that the SEC’s enforcement staff plans to recommend that the agency bring charges.

After the SEC filed its civil-fraud case against Goldman last month, a Morgan Stanley spokeswoman said: “Morgan Stanley did not make any misrepresentations to investors concerning the selection of the collateral for CDOs underwritten by Morgan Stanley.”