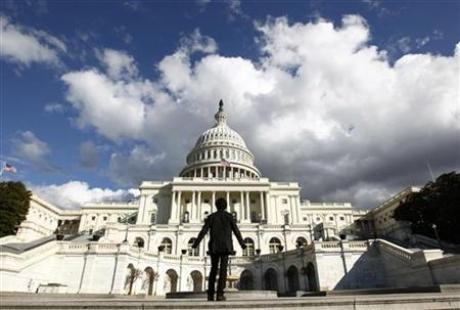 A tourist gazes up towards the dome of the U.S. Capitol (Reuters)

WASHINGTON (Reuters) – The United States posted an $82.69 billion deficit in April, nearly four times the $20.91 billion shortfall registered in April 2009 and the largest on record for that month, the Treasury Department said on Wednesday.

It was more than twice the $40-billion deficit that Wall Street economists surveyed by Reuters had forecast and was striking since April marks the filing deadline for individual income taxes that are the main source of government revenue.

Department officials said that in prior years, there was a surplus during April in 43 out of the past 56 years.

The government has now posted 19 consecutive monthly budget deficits, the longest string of shortfalls on record.

For the first seven months of fiscal 2010, which ends September 30, the cumulative budget deficit totals $799.68 billion, down slightly from $802.3 billion in the comparable period of fiscal 2009.

Department officials noted there were five Fridays in April this year, which helped account for higher outlays since most tax refunds are issued on that day.

But for the first seven months of the fiscal year, outlays fell to $1.99 trillion from $2.06 trillion in the comparable period of fiscal 2009, partly because of repayments by banks of bailout funds they received during the financial crisis.

The U.S. full-year deficit this year is projected at $1.5 trillion on top of a $1.4 trillion shortfall last year.

White House budget director Peter Orszag told Reuters Insider in an interview on Wednesday that the United States must tackle its deficits quickly to avoid the kind of debt crisis that hit Greece.