May 3 (Bloomberg) — Investor Marc Faber said China’s economy will slow and possibly “crash” within a year as declines in stock and commodity prices signal the nation’s property bubble is set to burst. 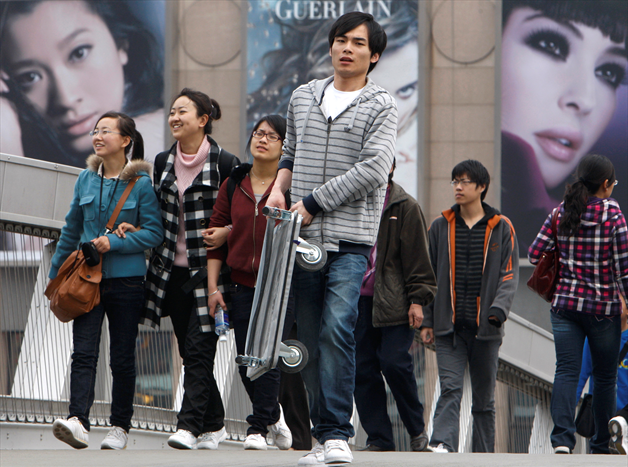 People walk in front of advertisements outside a department store in the Xidan district of Beijing in April. (Bloomberg)

May 11 (Bloomberg) — China’s inflation accelerated, bank lending exceeded estimates and property prices jumped by a record, increasing pressure on the government to raise interest rates and let the currency appreciate.

Consumer prices rose 2.8 percent in April from a year earlier, the fastest pace in 18 months, and property prices jumped 12.8 percent, the statistics bureau said in statements today. New lending of 774 billion yuan ($113 billion), announced by the central bank, was more than any of 24 economists forecast.

Asian stocks fell, with the local benchmark index entering into a bear market, and oil and copper slumped on concern the government will move to cool the fastest-growing major economy. China should focus on preventing excessive increases in asset prices and liquidity after Europe’s almost $1 trillion loan package reduced the risk of another global slump, central bank adviser Li Daokui said yesterday.

“Price pressures have been building throughout the economy, strengthening the case for higher interest rates and a stronger yuan,” said Brian Jackson, a Hong Kong-based strategist at Royal Bank of Canada. “China is at risk of overheating, with spot fires breaking out in various parts of the economy.”

Non-deliverable yuan forwards rose 0.1 percent, indicating that the government will scrap a peg to the dollar and let the currency gain 2.3 percent in the next year.

The jump in property prices in 70 cities was the biggest since data began in 2005, defying a government crackdown on speculation that intensified last month.

Statistics bureau spokesman Sheng Laiyun said that while April’s inflation was “mild” and not broad-based — largely reflecting food and residential-related costs including rents – – the nation faces significant pressure for bigger price gains. Causes include liquidity, commodity costs and a low comparative base last year, he added.

Europe’s debt crisis may spread even after the rescue plan unveiled yesterday, which could lead to “positive and negative” effects by restricting demand for exports while damping commodity prices, Sheng said.

China’s government aims to contain full-year inflation at 3 percent and avert property bubbles after record credit growth drove an economic rebound. Investors are concerned stimulus withdrawal and a slowdown in construction could choke off growth after an 11.9 percent expansion in the first quarter.

The gain in producer prices was the biggest in 19 months and exceeded economists’ 6.5 percent median estimate. In March the costs of goods as they leave the factory rose by 5.9 percent.

Not all of today’s indicators pointed up.

Industrial production rose 17.8 percent in April from a year earlier, below economists’ estimates and down from 18.1 percent in March. M2, the broadest measure of money supply, grew 21.5 percent, slowing from 22.5 percent.

UBS AG economist Wang Tao said loans are typically higher at the start of each quarter and the latest figure doesn’t put the government’s target of limiting lending to 7.5 trillion yuan this year in jeopardy. Economists’ median estimate for April was 585 billion yuan and the previous month’s lending was 510.7 billion yuan.

Still, policy makers have left benchmark interest rates and the yuan’s peg to the dollar unchanged.

“The double-dip risk in the world economy is likely to be reduced to a minimum,” Li, the policy adviser, said in an interview in Beijing, expressing his personal view of the European aid plan. “China’s growth rate is not a problem this year, and the main policy focus should be on preventing excessive gains in asset prices and liquidity.”

To contact the Bloomberg News staff on this story: Kevin Hamlin in Beijing on khamlin@bloomberg.net