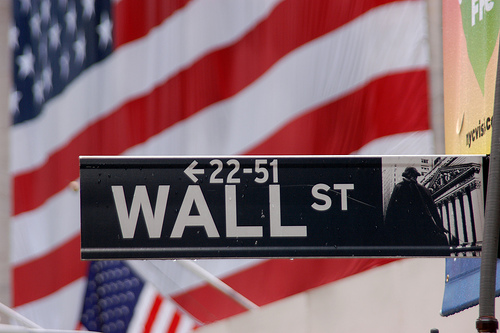 Manipulation by whom? Markets can be rigged with computers using high-frequency trading programs (HFT), which now compose 70% of market trading; and Goldman Sachs is the undisputed leader in this new gaming technique. Matt Taibbi maintains that Goldman Sachs has been “engineering every market manipulation since the Great Depression.” When Goldman does not get its way, it is in a position to throw a tantrum and crash the market. It can do this with automated market making technologies like the one invented by Max Keiser, which he claims is now being used to turbocharge market manipulation.

Whether Goldman Sachs actually crashed the market in this case will be left to conjecture, but Max Keiser explained in an email how it could theoretically be done:

Remove all the buy orders that you control (since HFT traffic is 70% of the order flow, if you simply pull your HFT buy orders, you remove a huge chunk of the market – in a heartbeat – leaving a sudden price vacuum). If you wanted to scare congress to vote the way you wanted them to vote – a congress that is directly invested in stocks trading on the exchange and ETF’s tied to the prices on the exchange – just pull your buys. When they do what you want them to do – replace your buys. If you want to make the market go up – pull your sell orders. It works both ways. (It’s all detailed in my Virtual Specialist Technology patent – how to make markets in an ‘infinite inventory environment.’)

We have long claimed that Goldman is the de facto monopolist of the NYSE’s program trading platform. As such, it is certainly the case that Goldman was instrumental in either a) precipitating yesterday’s crash or b) not providing the critical liquidity which it is required to do, when the time came. There are no other options.

We will gladly work with any Attorney General to provide them all the critical data and questions they need to build a criminal case, or in the DOJ’s case, an anti-trust case.