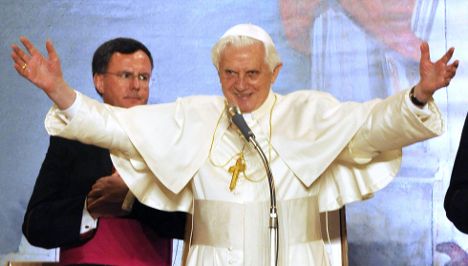 The church official who initially said it was his fault that a paedophile priest was given succour in Pope Benedict XVI’s former diocese has broken ranks, alleging he was bullied into taking responsibility to protect the pontiff.

Gerhard Gruber was Joseph Ratzinger’s general vicar in Munich during the 1980s, when Ratzinger, now Pope, was Archbishop.

Ratzinger chaired the meeting which decided to offer paedophile priest Peter H., a safe haven in Munich. The priest was also given further positions of trust in the church, and was later convicted of further child abuse.

Gruber’s friends have told Der Spiegel news magazine that when the story came to light last month, he was under immense pressure to take responsibility for the decision in order to shield the Pope from accusations of having helped a paedophile.

The magazine wrote that he was urgently “requested” to take full responsibility in order to take the Pope “out of the firing line.”

He wrote in a letter to a friend that he had been faxed a statement that he was to make, though he had been given the opportunity to suggest changes.

Gruber issued a statement in March which said, “The repeated employment of H. in priestly spiritual duties was a bad mistake. I assume all responsibility.”

The implication from the bishopric that Gruber had acted alone in offering help to the paedophile priest, and not turned him over to the police, has greatly upset him, the magazine wrote.

The Catholic church’s handling of repeated child abuse allegations in Germany and beyond has prompted repeated calls for bishops to resign for either not reporting claims to secular authorities, or for making light of charges made by victims.

The latest bishop under such pressure is Heinrich Mussinghoff, bishop of Aachen, whose handling of an abuse claim has been heavily criticised by a child protection group.

The Initiative Against Violence and Sexual Abuse of Children and Youths accuses Mussinghoff of ignoring claims made this January by a 19-year-old man that he was sexually abused as a child by the bishopric’s head of personnel.

Nothing has been done about the man’s claims, the initiative’s spokesman Johannes Heibel said.

“Those responsible should resign because the church has not met its own promises, despite a months-long debate over sexual abuse,” he said.

The accused priest, named only as Georg K., is said to have regularly abused the man and others, even making videos and photos of the abuse. The man’s family has not yet been contacted by anyone from the bishopric, having made the claims.

When Der Spiegel contacted the bishopric for a comment, it was told, “The boy should have contacted us, not us him.”