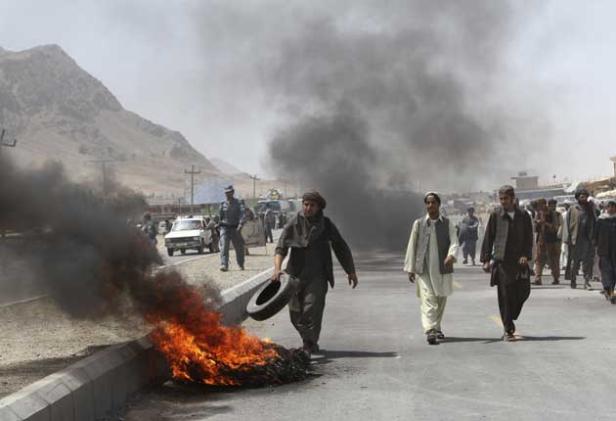 Afghan protesters burn tyres during an anti-American protest in Kandahar after troops fired on a bus, killing four passengers and injuring 18

Nato’s hopes for winning over the Afghan population in the south of the country ahead of a massive new military campaign took a major blow yesterday when Nato soldiers opened fire on a civilian bus in Kandahar City and killed four passengers.

Eighteen passengers were also injured in the shooting, which sparked riots in Kandahar. Hundreds of protesters burned tyres, chanted “Death to America! Death to Karzai! Death to this government!” and blocked the main road out of the city.

The timing could hardly have been worse, with tensions already rising ahead of a summer offensive designed to bring the city and its surrounds back under the control of the Western-backed government in Kabul.

Nato and Afghan officials said the incident occurred shortly before dawn but accounts of what happened diverge. One passenger, interviewed in hospital, said the bus had pulled over to allow a Nato convoy to pass. “They just suddenly opened fire, I don’t know why,” said Rozi Mohammad, whose eye was swollen shut and face and clothes were matted with blood. “We had been stopped and after that I don’t know what happened.”

But Nato said that the bus accelerated as it approached a slow-moving convoy searching for roadside bombs. In the darkness soldiers only saw a large vehicle approaching them at speed and, after trying to warn it off with hand signals and flares, opened fire.

“Perceiving a threat when the vehicle approached once more at an increased rate of speed the patrol attempted to warn off the vehicle with hand signals prior to firing upon it. Once engaged, the vehicle then stopped,” Nato said. It added that it had dispatched an “incident assessment team” to find out what happened.

Inside the city, protesters slammed not just Nato but also President Hamid Karzai for failing to stand up to the foreign forces. “The Americans are constantly killing our civilians and the government is not demanding an explanation,” said Mohammad Razaq, a local resident. “We demand justice from the Karzai government and the punishment of those soldiers responsible.”

The incident was a stark reminder of the difficulties facing US General Stanley McChrystal, the top Nato commander in Afghanistan, who is grappling with a counter-insurgency doctrine that calls for Nato troops to protect Afghan civilians. Since taking command last year, he has issued tighter rules of engagement and kept a constant stream of communication about the need to keep civilian casualties as low as possible.

In a video conference taking questions from troops earlier this year, General McChrystal said with some frustration, “We’ve shot an amazing number of people” who were not, in fact, threats. In February, he apologised to the Afghan people after a Nato airstrike killed 27 civilians. A separate strike in February killed five civilians suspected of planting roadside bombs close to the scene of Monday’s incident.

Kandahar Mayor Gulam Hamidi said the blowback from civilian casualties was obvious. “I’ve told the Americans and Nato that people are very angry about these kinds of attacks,” he said.

In a separate incident soon after the shooting, a Taliban suicide squad attacked the provincial headquarters of the secret police, a heavily defended compound in Kandahar City. Two of the bombers were killed in a 45-minute battle and a third was captured after being injured by security forces.

Nine civilians including a teacher and five children were wounded in the fighting. According to the UN, the Taliban was responsible for 67 per cent of civilians killed in Afghanistan last year.