Thai ‘red shirt’ protesters ruled out negotiations with the government Sunday, one day after clashes during the Thailand protests killed at least 21 people in the country’s deadliest political violence since 1992.

The Associated Press reports that 20 people were killed in intense street clashes Saturday, including five soldiers and 16 civilians, while at least 834 people were injured.

Hiro Muramoto, a 43-year-old Japanese national, was shot in the chest and arrived at Klang Hospital without a pulse, hospital Director Dr Pichaya Nakwatchara said.

Muramoto, who had worked for Reuters in Tokyo for more than 15 years, was married with two children. 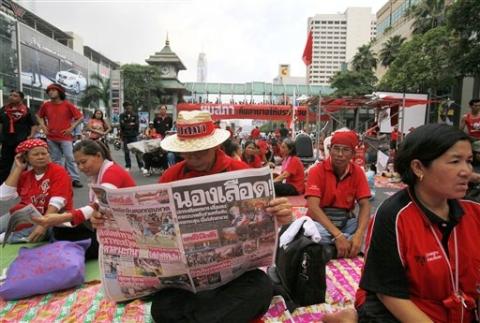 Thousands of anti-government protesters flooded back into the center of Bangkok Sunday and rejected talks with the government, just hours after clashes between protesters and soldiers left at least 20 people dead hundreds wounded.

Leaders of the so-called Red Shirt protesters said Sunday they will not negotiate with what they called murderers.

Thai medical officials say a Japanese cameraman with the Reuters news agency and at least five soldiers are among those killed.  Several hundred others were injured in clashes Saturday in other parts of Thailand’s capital.

A government spokesman said Sunday the army had not fired any live rounds at the protesters.

Thailand’s Prime Minister Abhisit Vejjajiva went on television late Saturday to express condolences to family members of the victims.  He said the government will investigate the violence.  He rejected protesters’ demands to resign.

A U.S. State Department statement late Saturday called on both sides to “show restraint” and “work out disagreements peacefully through earnest negotiation.”

Security forces are reported to have fired rubber bullets, tear gas and live ammunition in an attempt to break up the demonstration.  Protesters fought back with stones, guns and gasoline bombs.

Red Shirt demonstrators are demanding new elections soon, and the resignation of Prime Minister Abhisit.  Most of them back former Prime Minister Thaksin Shinawatra, who was ousted in a 2006 coup.  He lives in exile after fleeing Thailand to avoid a prison sentence on charges of corruption.  He denies the charges.

Mr. Thaksin has the support of many rural and low-income citizens who have since rallied for his return.

Prime Minister Abhisit came to power in December of 2008, after months of massive anti-Thaksin protests by demonstrators known as the Yellow Shirts.

Some information for this report was provided by AP, AFP and Reuters.