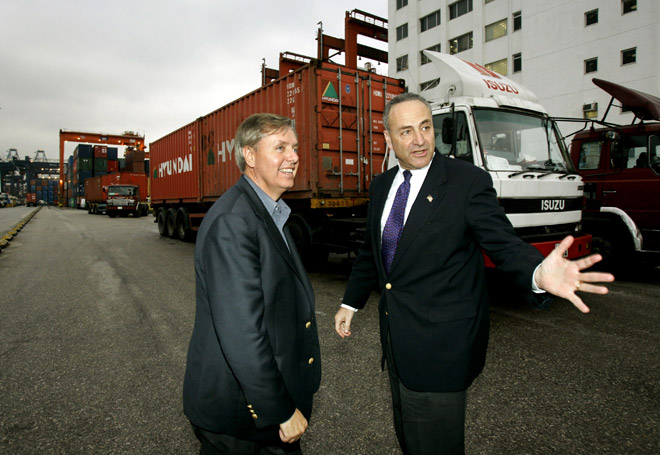 Lawmakers are proposing a national identification card – what they’re calling “high-tech, fraud-proof Social Security cards” – that would be required for all employees in the United States.

The proposal by Sen. Charles Schumer (D-New York) and Sen. Lindsay Graham (R-South Carolina) comes as the states are grappling to produce another national identification card at the behest of the Department of Homeland Security. Virtually none of the states are in compliance with this Real ID program – adopted in 2005 – requiring state motor vehicle bureaus to obtain and internally scan and store personal information like Social Security cards and birth certificates for a national database.

Now comes a bid for a second card.

Homeland Security officials pointed to the Sept. 11 hijackers’ ability to get driver’s licenses in Virginia using false information as justification for the proposed $24 billion Real ID program. Schumer and Graham point to illegal immigration as cause for their plan.

“We would require all U.S. citizens and legal immigrants who want jobs to obtain a high-tech, fraud-proof Social Security card. Each card’s unique biometric identifier would be stored only on the card; no government database would house everyone’s information,” they said. “The cards would not contain any private information, medical information or tracking devices. The card would be a high-tech version of the Social Security card that citizens already have.”

Jim Harper, director of information policy studies at the Cato Institute, suggests the plan would undoubtedly lead to a national database. He added that “there is no practical way of making a national identity document fraud-proof.”

“Because of the ID card’s proposed universality, it will likely be requested and required by airlines, insurance agencies, health care providers, mortgage lenders, credit card companies, and so forth,” he said.

And this so-called mission creep is no fantasy.

A recent and clear example of this is the Adam Walsh Child Protection and Safety Act. The 2007 law requires states to have statutes demanding sex-offender registration for those convicted of the non-sex-related offenses.

Graham and Schumer said they have discussed the immigration plan with President Barack Obama, but that apparently is as far it has gone. Regarding Real ID, beginning Jan. 1 the law was supposed to have blocked anybody from boarding a plane using their driver’s license as ID if their resident state did not comport with the Real ID program.

But the Department of Homeland Security extended the deadline for another year.