NASA scientists are searching for an invisible ‘Death Star’ that circles the Sun, which catapults potentially catastrophic comets at the Earth. 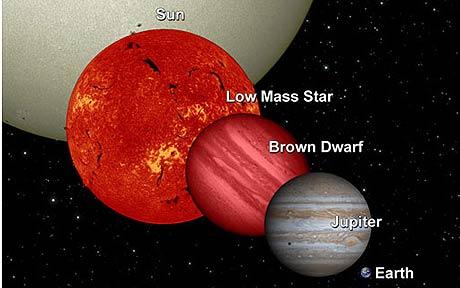 This diagram shows a brown dwarf in relation to Earth, Jupiter, a low-mass star and the sun. Photo: NASA

The star, also known as Nemesis, is five times the size of Jupiter and could be to blame for the impact that wiped out the dinosaurs 65 million years ago.

The bombardment of icy missiles is being blamed by some scientists for mass extinctions of life that they say happen every 26 million years.

Nemesis is predicted to lie at a distance equal to 25,000 times that of the Earth from the Sun, or a third of a light-year.

Astronomers believe it is of a type called a red or brown dwarf – a “failed star” that has not managed to generate enough energy to burn like the Sun.

But it should be detectable by a heat-sensitive space telescope called WISE, the Wide-Field Infrared Survey Explorer.

Launched last year, WISE began surveying the skies in January. It is expected to discover a 1000 brown dwarfs within 25 light-years of the Sun – right on our cosmic doorstep – before its coolant runs out in October.

The nearest normal star to us is around 4.5 light-year away.

Our solar system is thought to be surrounded by a vast sphere of icy bodies, twice as far away as Nemesis, called the Oort Cloud.

Some get kicked in towards the planets as comets – giant snowballs of ice, dust and rock – and the suggestion is that the Death Star’s gravitational influence is to blame.

The paleontologists David Raup and Jack Sepkoski discovered that, over the last 250 million years, life on Earth has been devastated on a 26-million-year cycle. Comet impacts are suggested as a likely cause for these catastrophes.

A similar impact by an asteroid wiped out the dinosaurs 65 million years ago, a major inquest by scientists concluded last week, though that is not being blamed on Nemesis.

Most stars have one or more companion stars orbiting around each other, which would make the sun’s single status unusual.

A major clue to Nemesis’s existence is a mysterious dwarf planet called Sedna that was spotted on an elongated 12,000-year-long orbit around the sun.

Mike Brown, who discovered Sedna in 2003, said: “Sedna is a very odd object – it shouldn’t be there! It never comes anywhere close to any of the giant planets or the sun. It’s way, way out there on this incredibly eccentric orbit.

The only way to get on an eccentric orbit is to have some giant body kick you – so what is out there?”

Professor John Matese, of the University of Louisiana at Lafayette, says most comets in the inner solar system seem to come from the same region of the Oort Cloud – launched by the pull of a companion star to the sun that scatters comets in its wake.

He said: “There is statistically significant evidence that this concentration of comets could be caused by a companion to the Sun.”