Iceland’s voters expressed their outrage on Saturday against bankers, the government and what they saw as foreign bullying, overwhelmingly rejecting a plan to pay $5.3 billion to Britain and the Netherlands to reimburse customers of a failed Icelandic bank, Sarah Lyall reported in The New York Times.

With about 98 percent of the votes counted Sunday, roughly 93 percent of voters said no to the plan, in the first public referendum ever held on any subject in Iceland. Less than 2 percent voted yes, and the rest of the votes were invalid.

Voters in Iceland have overwhelmingly rejected proposals to pay the UK and the Netherlands in the wake of collapse of the Icesave bank.

With a third of results counted, 93% of voters said “No” in a referendum.

Iceland’s prime minister says her government will remain in office and continue to seek a repayment deal.

The British and Dutch governments want reimbursement for the 3.8bn euros (£3.4bn; $5.2bn) they paid out in compensation to customers in 2008.

Talks between Iceland, the UK and the Netherlands three countries broke down on Friday without agreement.

Prime Minister Johanna Sigurdardottir said she would not vote in Saturday’s poll as her government was seeking to continue the negotiations.

With a third of votes counted, 93% of Icelanders have voted “No”, less than 2% back the deal, and the remaining votes are invalid.

Mrs Sigurdardottir said that her government would stay in office, despite the “No” results.

“This has no impact on the life of the government,” she said.

“Now we need to get on with the task in front of us, namely to finish the negotiations with the Dutch and the British.”

During voting on Saturday, hundreds of protesters outside parliament in the capital Reykjavik banged pots and waved banners reading “Icesave No! No! No!”.

As results came in, Foreign Minister Ossur Skarphethinsson said talks with the UK and the Netherlands would continue, adding that the referendum result was good for his government’s position.

The government had hoped to avoid the vote by agreeing a new repayment plan before the weekend.

Icelandic voter: “I voted no of course”

Britain and the Netherlands want the money as repayment for bailing out customers in the Icesave online bank, which folded in 2008 due to the global financial meltdown.

“It’s not a pointless exercise because the referendum, according to our constitution, is on whether the deal which the British and the Dutch insisted on at the end of last year, should remain in force as a law in this country,” he told the BBC.

“It is encouraging that in the last few weeks the British and the Dutch have acknowledged that that deal, on which the referendum takes place, is an unfair deal and that is by itself a tremendous achievement by the referendum… we will be able to continue the negotiations.”

Many Icelanders believe the plan should be rejected because they feel they are being penalised for the mistakes of the banking industry.

“I will vote ‘No’ simply because I disagree very strongly with us… having to shoulder this burden,” Ingimar Gudmundsson, a lorry driver, told AFP news agency.

“We want to pay our debts but we want to do it without going bankrupt,” Steinunn Ragnarsdottir, a pianist who voted in Reykjavik City Hall, told Reuters.

There is also anger against the UK for using anti-terrorist legislation to freeze Icesave assets in the country. 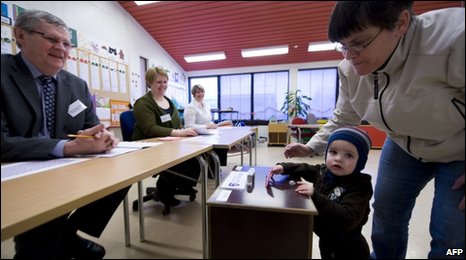 Some 230,000 Icelanders were eligible to vote on Saturday

Arni Gunnarsson, a former Icelandic MP, told the BBC News website: “We have not forgotten how Britain used battleships against Iceland during the cod wars.

“We find this a very strange method of thanking the Icelandic people for sacrificing the lives of their seamen during World War II.

“The colonial attitude is still going strong. The UK should come to its senses.”

The Reykjavik government approved the repayment plan last December but it was blocked by Mr Grimsson in January, which led to the referendum being called.