– Britain At Risk Of Worse Government Debt Crisis Than Greece

… but there is always more than enough taxpayer money left for corporate pals, Big Brother and the New World Order.

The Government is funding new research aimed at getting permission to fly drones anywhere in Britain, in a move which could benefit defence companies BAE Systems, EADS and Thales but inflame civil liberty concerns. 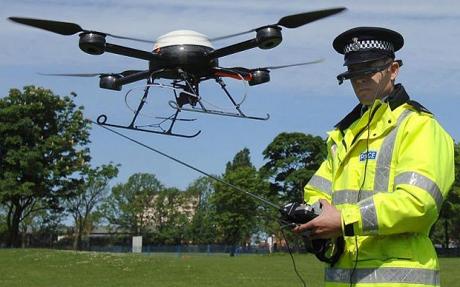 The use of unmanned aircraft for surveillance hit the headlines last week, after Merseyside Police had to ground their drone when it was discovered they were using it without a licence.

But a government-funded European group is pushing ahead with work aimed at showing that drones, known as unmanned aerial vehicles (UAVs), can safely be used in civil airspace. Drones cannot be flown outside regulated areas at present because they are controlled remotely and do not have the ability to “see”.

The Civil Aviation Authority (CAA) must be satisfied the aircraft has the same ability as a piloted plane to spot unexpected obstacles and take action to avoid them, before they will be let loose above Britain. The CAA also restricts the use of drones for surveillance because of concerns about invasion of privacy.

The European Defence Agency has hired aerospace and defence group EADS to research how communication via satellites can be used “for the integration of unmanned aircraft systems into European airspace”, with the goal of starting demonstration missions next year.

The study aims to show that satellites are reliable enough to allow uninterrupted communication between the drone and the person piloting it remotely, giving the aircraft an adequate “sense and avoid” capability to make it safe to fly in built-up areas and to share the sky with other planes.

Drones are of interest to the military and the police as surveillance tools, and could be used by immigration authorities for patrolling Britain’s coastline. But concerns have been raised because the UK is already one of the most “watched” countries in Europe, with the proliferation of CCTV cameras.

Less controversial uses for unmanned aircraft include sending back aerial images to search and rescue services, and to farmers surveying the progress of crops.

The RAF already flies Reaper drones in Afghanistan, which are operated remotely from Nevada using satellite communications, along with the US military. Reaper is a large drone, close to aircraft-size, which carries ammunition but is mainly used for surveillance. US forces have been attacking Taliban strongholds on the border of Pakistan and Afghanistan with drones.

The Army will start using the smaller Watchkeeper drone, built in Leicester by French defence company Thales, later this year. It is understood the Army will start testing Watchkeeper in the next few weeks, at Aberporth in west Wales, Britain’s only licensed site for UAV flights. The Army hopes to get permission to fly them over training grounds in Salisbury Plain and Sennybridge in South Wales.

BAE, Britain’s biggest manufacturer, is also developing UAVs, with the Mantis drone making its first test flight in Australia last year. That programme is jointly funded by Ministry of Defence (MoD) and also uses parts made by Rolls-Royce and Qinetiq.

The MoD said it shares information with the European Defence Agency but is not directly involved in the research with EADS. The military is currently bound by the same restrictions on drones as civil operators, and can only test in restricted areas with the permission of the CAA.

The European Defence Agency paid €400,000 (£360,000) to EADS’s defence arm and its Astrium satellite business to carry out the study. Astrium employs 3,000 people in Britain.

“The reliability and continuity of the telecommunications link is absolutely crucial,” said Eric Beranger, chief executive of Astrium’s services business. “The people piloting and monitoring the UAV need to be able to act as if they were the true pilot and the best way to do this is by satellite.”