Maybe the headline should read:

‘Tories plan to bribe voters, by selling bank shares to the taxpayers, that they already own’

The government bought the shares with taxpayers money and now the Tories plan to sell those bank shares back to the taxpayers, who already own them?!

What is the alternative?: 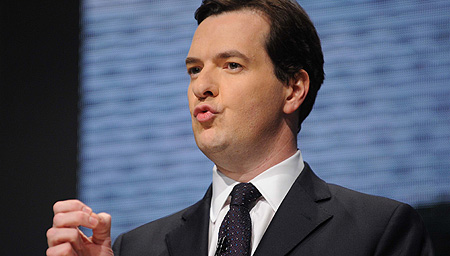 (The Sunday Times) — THE Tories are planning a bank shares bonanza for millions of families as they fight to save their lead in the polls, which has slumped to just 6%.

Cheap shares would be offered to small investors when the government’s £70 billion stake in Royal Bank of Scotland and Lloyds Banking Group is sold, George Osborne, the shadow chancellor, said last night.

The “people’s bonus” plan comes as a Sunday Times/YouGov survey today reveals that the Tories’ lead over Labour has slipped to the narrowest gap in more than a year.

The poll, the first in a series of weekly surveys which will be conducted between now and the general election, puts the Conservatives on 39%, down one point on January’s figure, and Labour on 33%, up two. The Liberal Democrats drop one point to 17%.

The six-point gap is the narrowest since December 2008, when Gordon Brown was enjoying a temporary boost following the successful rescue of the banking system.

The results suggest a hung parliament is likely, with the Tories set to take 290 seats, 10 seats more than Labour. In such a scenario Brown might be able to cling on to power if he could get Lib Dem backing.

Conservative support has slipped steadily over the past few months amid criticism of the party’s lack of positive policies. The growing budget deficit has meant that the party has been unable to promise significant new tax cuts or spending commitments.

Osborne’s bank privatisation scheme is an attempt to inject fresh excitement into the Conservative campaign.

“The bankers have had their bonuses,” he said in an interview with The Sunday Times. “We want a people’s bank bonus for the people’s money that was put into these organisations.” The government spent £70 billion buying shares in the two banks to save them from collapse and now owns 84% of RBS and 43% of Lloyds.

While the shares are currently trading 30% below what the Treasury paid for them, City analysts expect the market will recover and a sell-off could begin within three years.

While the details of the Tory plan are still being drawn up, it is expected that people would be offered shares worth between a few hundred and a few thousand pounds at a discount on the market price.

The shares would be offered through the Isa scheme, so any dividends and capital gains would be tax-free. Even cheaper deals would be offered to young people and families on low incomes. There could also be special discounts for parents saving for their children.

The scale of the bank sell-off would dwarf Margaret Thatcher’s 1980s privatisations of British Telecom and British Gas.

Osborne said: “To get a large public offer off the ground like British Gas and British Telecom you want to make a special offer to all people.

“But there were back then, and there can be in the future, special ways of targeting particular groups of people.

“It fits in with an argument you have seen made within the Conservative family in the past few years about ‘recapitalising the poor’. We will look at special offers, discounted share sales and the like.”

The Tories’ slump in the polls is likely to stoke discontent in the party against the Cameron leadership.

One senior MP said last night: “The inner circle can crow all they like about how well they are doing, but the elephant in the room is the polls. Cameron spent last week talking about sexualisation of children and nine-year-old girls in suspenders, when there are much more important issues he should be talking about.”

Another backbencher said: “Cameron and his team are panicking. We are not over the line yet. They are trying to mumble their way to the general election, playing it safe, when what people want is real passion.”

• Facing renewed allegations about his volatile temper, Brown last night denied hitting anyone. He told a television interviewer: “I get angry with myself … I throw the newspapers on the floor or something like that.”